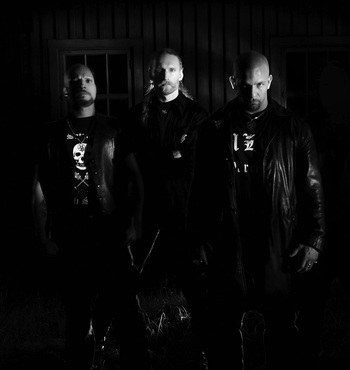 One of Sweden’s most iconic and influential Black Metal bands, Dissection were first formed in 1989 in Stromsäd by Jon Nödtveidt and Peter Palmdahl. They released their first album, The Somberlain, in 1993, which was followed in 1995 by the critically-acclaimed Storm of the Light’s Bane.

Sometime around the release of Storm, Nödtveidt joined the newly-formed Misanthropic Luciferian Order, a sect within the Temple of the Black Light. In 1997, Nödtveidt was charged as an accessory to murder and was sent to prison, and Dissection split. He was released in 2004, and reformed the band with an all-Satanist lineup, and they released their third and final album, Reinkaos in 2006.

In 2007, Nödtveidt eventually dissolved the band once and for all. Believing that having reached the peak of his life, Nödtveidt shot himself in a ring of eleven candles whilst holding a copy of the MLO’s book, Liber Azerate.

Tropes applicable to Dissection include: