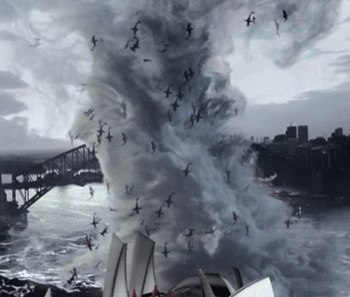 Real Life has its share of dangerous or unusual weather, which can be integrated into the plot. Storms can do untold damage on land and sea, acid rain devastates the environment, sandstorms bring desert travel to a halt and heavy rain makes everyone feel a bit gloomy. But sometimes this isn't enough.

This trope covers bizarre and deadly forms of weather that wouldn't normally occur on Earth. This might be because it's caused by something in the setting (e.g. mountains that storms blow shards of volcanic glass down from). This typically helps world-build and make it more unique (it's hard to get more detailed than by mapping out the ecosystem). It can also be something clearly unnatural within the setting (e.g. aliens have turned all the water in the clouds into hydrogen peroxide in a fiendish plot to turn everyone into bleach blondes). This makes it clear that whatever caused it is extremely powerful (it's hard to get more dangerous than by messing with the ecosystem).

Some specific types can include:

Because of the hazardous nature of this weather, it often shows up as Hostile Weather. The more dangerous versions are common on Death Worlds and anywhere else you can find Everything Trying to Kill You. In general, this is also what you can expect to come blowing out of an Alien Sky.

Compare/contrast Death from Above (things dropping from the sky due to artificial causes, like Rain of Arrows or Orbital Bombardment), Rain of Blood (when it's literal), Perpetual Storm (an otherwise normal weather phenomenon which lasts indefinitely), and Empathic Environment where the weather reflects the fact that something dramatic is happening (the two can overlap, however, when the empathic weather is also bizarre weather).