Literature / Cloudy with a Chance of Meatballs 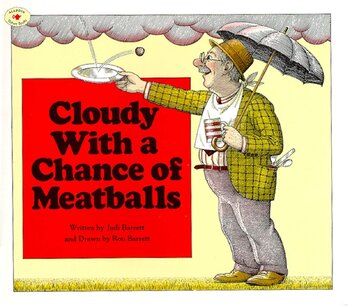 Cloudy with a Chance of Meatballs is a 1978 children's storybook by Judi Barrett with illustrations by Ron Barrett.

The story begins with a young girl describing a Saturday morning at her home. Saturday is Pancake Day at her house. The girl's grandfather makes the pancakes. When the dog runs past the grandfather, he accidentally causes a pancake to fly through the air and hit his grandson Henry in the face. The family laughs it off and the rest of the day goes as expected. That night the grandfather tells his grandkids the best bedtime story he knows of...

Far, far away and across several oceans there once was a small town of about 300 called Chewandswallow. Chewandswallow was like many towns out there, except for the fact it had no food stores. There was no reason for such stores as all the food everyone needed came raining from the sky each day. Food, completely cooked, came from the heavens three times a day in vast amounts. No person or animal was ever hungry in Chewandswallow.

One day, however, the weather started acting up. Some days nothing but smelly Gorgonzola cheese fell from the skies while other days nothing but overcooked broccoli came instead. Too much of certain food and bad combinations kept falling for no apparent reason. One day it got even worse, and oversized foods began to fall in large qualities from the sky. The food wrecked the town to the point where the sanitation department gave up. With no other choice left, everyone built boats made of bread and sailed to find a new place to live. This new land didn't have food falling from the sky, but the people learned to adapt. No one ever went back to Chewandswallow.

The book ends with the grandfather wishing his grandkids goodnight. The next day the kids go sledding. They look at the sun over a hill and think it looks a bit like butter over mashed potatoes.

Cloudy with a Chance of Meatballs has two sequels: Pickles to Pittsburgh (2000) and Planet of the Pies (2013).

In 2009 the original book was very loosely adapted into an animated feature film.