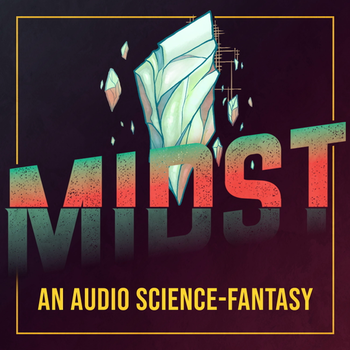 When you’re starting a new life for yourself on an otherworldly frontier, the last thing you need is for the moon to fall out of the sky, reality to eat itself alive, and heavily-armed interplanetary bureaucrats to decide to murder you. Unfortunately, it's just one of those days.
Advertisement:

Midst is a tiny islet in the center of the universe, halfway between the Fold and the Un. Despite (or because) of its position, its residents have done quite well for themselves. Sometimes people's mouths flip upside down in the dead of night, and sometimes monsters skulk out of the wilderness, but on the whole Stationary Hill is quite a lovely little mining town. They even have a cabaret.

Then the enforcers of the Trust touch down, and that status quo is gone.

Lark is a hunter who lives in the red wastes outside the town, selling monster skins and telling fortunes, and she does her level best to be left alone. The locals are afraid of her, and rightly so.

Phineas Thatch is an earnest young man who, through grit and determination, risen high within the interplanetary Trust. He is now the Adsecla to the Prime Consector of the Trust, but he is not a free man. Despite his valor, despite his courage, he is still in debt to the Trust.

Moc Weepe is the cunning manager of the Black Candle Cabaret, the grandest (and only) feature in the night life of Stationary Hill. Best not to ask about the cause his surreal alabaster skin. Certainly best not to ask about some of his...business practices, some of which might make certain people very angry indeed. When the Trust arrives in Stationary Hill, he is the first to see the opportunity—and the danger.

Then there is the Trust. It's a bit like a government, a bit like a religion, and quite a lot like a great galactic bank. Status and wealth are based on Valor. You can earn valor with good deeds and hard work, but the exchange rate is hard to pin down. Every Trustee has an abacus with their Valor beads on full display. As a rule, new Trustees start out in debt. If you leave the Trust without zeroing out your account, the Trust will track you down.