"Blackmail" Is Such an Ugly Word 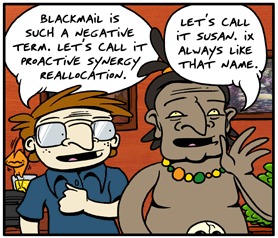 Getting postmodern with the trope?
"'Blackmail' is an ugly word. I prefer 'extortion'. The 'X' makes it sound cool."
— Bender, Futurama
Advertisement:

This trope dates back to movies in the 1930s (and possibly earlier). A character discovers that she is the target of blackmail and confronts the blackmailer, who — while not denying their actions — would rather call it something prettier, like a "comprehensive insurance policy". The line is virtually stock dialogue now; as a trope, it is at the very least discredited. It was already being lampshaded in the '50s, and since then it's only used for laughs (or period flavor) these days.

Variations on the theme sometimes appear for other "ugly" words in various situations where the perpetrator can't or won't deny the substance of the accusation, but insists on softening it with a euphemism.

Many times, the character will claim that something is extortion instead of blackmail or visa versa. It appears that fictional characters are more comfortable admitting to that since "X" Makes Anything Cool.

According to free advice.com, extortion happens when someone gets money, property, or services through coercion, e.g.: threat of violence, destruction of property, improper government action, or withholding testimony. Blackmail is when a person threatens to reveal information about a victim or his family members that is potentially embarrassing, socially damaging, or incriminating unless a demand for money, property, or services is met. Even if the information is true or actually incriminating, a person can still be charged with blackmail if he or she threatens to reveal it unless the victim meets his or her demand.

A subtrope of Distinction Without a Difference and Insistent Terminology. Compare Is That a Threat?, Technical Euphemism, and Unusual Euphemism.

Examples of a different Ugly Word

The Warden enforces the Admin's banning of the word 'prison' in the Sunshine Institute.

The Warden enforces the Admin's banning of the word 'prison' in the Sunshine Institute.