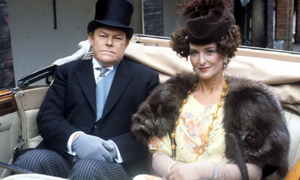 Brass was a British television comedy-drama, created by John Stevenson and Julian Roach, which initially ran for two series on ITV between 1982 and 1984; it was subsequently brought back for a third series in 1990 on Channel 4, with some changes to the cast. It was primarily a parody of the sort of "gritty" melodramas of British industrial town life which had been popular in literature from the Victorian period through to the 1930s, and as period dramas on British television in the 1970s. ("Brass" is northern English slang for "money" and also for "effrontery".) It also parodied American "supersoaps" such as Dallas and Dynasty, not least in its opening title sequence

. The writers had a very clear view of the dominant tropes in their various sources, and played them all for laughs at every opportunity.

Most of the characters were members of two families in the fictional town of Utterley, in the industrial north of England; the wealthy Hardacres, who owned the local mine, mill, and munitions factory, and the working-class Fairchilds. The Hardacre family was headed by comedically ruthless self-made businessman Bradley (Timothy West). His aristocratic wife Lady Patience (Caroline Blakiston) was an alcoholic; their (surviving, supposed) children were the nymphomaniac Isobel (Gail Harrison), innocent Charlotte (Emily Morgan), ambitious but frequently incompetent oldest-son-and-heir Austin (Robert Reynolds, later Patrick Pearson), and a gay Cambridge student Morris (James Saxon). The Fairchilds were militant socialist "Red" Agnes (Barbara Ewing), her idiotic, subservient husband George (Geoffrey Hinsliff, later Geoffrey Hutchings), and their (supposed) sons Jack (Shaun Scott), a defiant working-class political idealist, and Matt (Gary Cady), a sensitive soul who wrote ridiculously bad, plagiaristic poetry ("Thou are more lovely and more interesting/Rough winds do shake the darling buds of May but that's quite another thing"). Because of various clandestine affairs that took place in the series backstory, actual parentage for some of these characters often turned out to be a surprise. The most significant other character was the idealistic young Scottish Dr. McDuff (David Ashton).

Most of the plots of the series revolved around Bradley's attempts to squeeze maximum profits from his business by oppression of his workers, and attempts by the rest of the cast to oppose him in various ways (up to and including murder) for various reasons. However, these tended to be complicated by the fact that many of the characters were having sexual affairs with each other — in fact, Bradley and Agnes were having a relationship throughout the series. Other events, typical of the sort of dramas that were being parodied, included factory explosions, mining disasters, weddings, and elections. Morris and his beloved Teddy Bear also represented a joke about Brideshead Revisited, the first television adaptation of which had appeared and been successful a little before Brass, and Morris also became involved in spying for Stalinist Russia — something also associated with some Cambridge students of the period. Matt also went off to the Spanish Civil War at one point. The last series moved events forward to 1939 and the start of World War II, in which the cast inevitably became involved, and moved much of the action to London.