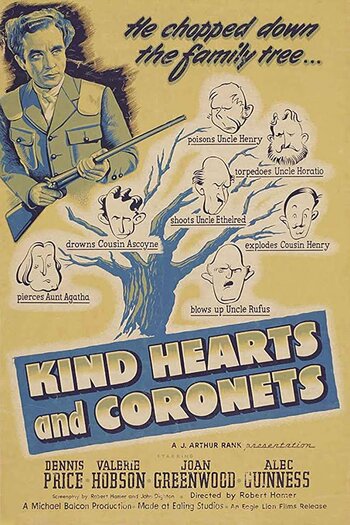 Louis D'Ascoyne Mazzini (Price) is the son of the daughter of the Duke of Chalfont and a poor Italian opera singer. Infuriated by the mésalliance, the D'Ascoyne family denies any knowledge of Louis's existence, and when his mother dies, will not even grant her burial in the family vault. Louis formulates a plan to kill all of the D'Ascoynes in various ridiculous ways, in order to gain what he sees as his justified revenge and rightful place at the head of the family. Meanwhile, Louis's childhood sweetheart, Sibella (Greenwood), is laying her own schemes for advancement... though his attractive cousin Edith (Hobson) stands in her way.

The movie has a very dry, ironic tone to it, but there are some moments of complete silliness. For instance, Louis kills one of the D'Ascoynes by shooting an arrow at her hot air balloon (and then reciting a humorous variation on the Longfellow poem "The Arrow and the Song" - see Rhymes on a Dime below).

Based on the 1907 novel Israel Rank by Roy Horniman where the eponymous character is half-Jewish rather than half- Italian. The film changed Israel's name and heritage because the film had a Rank (J. Arthur) as its producer and a film about a half-Jewish serial-killer wouldn't have gone down very well so shortly after the fall of the Nazi Regime in Germany, though the book itself is not anti-Semitic.

Adapted into The Musical in 2014 as A Gentleman's Guide to Love and Murder, nominated for 10 Tony Awards (winning 4, including Best Musical) in its Broadway run.