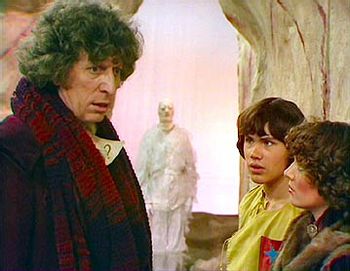 The Fourth Doctor meets a ghost from his future and realizes his time is short before he hangs up the scarf and switches to celery.
"Never guess. Unless you have to. There's enough uncertainty in the universe as it is."
— The Doctor
Advertisement:

The one with the cardboard cutout Master. And Four had a big fall.

The universe nearly ends and Tom Baker leaves Doctor Who after an amazing— and still unmatched— seven years and forty-one (or forty-two) serials (clocking in at either 172 or 178 half-hour episodes overall). We're not sure which is more important at this stage.

The Doctor and Adric make a pit stop in 1981 Britain, so that the Doctor can materialize right on top of a real police box and make hyper-precise multi-dimensional measurements of it, which he needs to take to the mathematics nerds of Logopolis so they can fix the chameleon circuit. (Just nod along, OK?) The Master, anticipating this, materializes his spare TARDIS (which he nicked from Goth that one time) around that exact same police box moments before. Which means that the Doctor's TARDIS now contains the Master's TARDIS containing a real police box. (Still following us?) Time and space get a bit wonky, so the Doctor and Adric investigate the string of TARDISes in the console room — all identical except for being progressively less well-lit.

Meanwhile, a plucky young Aussie named Tegan Jovanka is off to her first day of work as a flight attendant, when The Alleged Car breaks down on the way to Heathrow. Good thing there's a handy police box nearby, so she can call for help. But she hadn't planned on getting lost inside. She completely fails to be impressed by the fact that it's obviously an alien spaceship, and instead decides to go yell at the captain of the thing. Meanwhile, her aunt, who was driving her to the airport, made the mistake of being alive in the Master's vicinity and is thus made quite small.

The sonorous bong of the TARDIS's cloister bell (its Oh, Crap! signal) makes itself heard, so the Doctor and Adric eventually find their way through the nesting TARDISes back to the outside world. The Doctor suspects that the multiple TARDISes thing is yet another devious trick of the Master, and dematerializes at once, bound for Logopolis. Tegan, by now extremely confused, finds her way back to the control room and demands to know what the hell is going on and to be put back in 1981 right now, please — rather angrily, true, but then again "Sorry I'm late, I accidentally stepped into a spacetimeship that looked exactly like a police box and ended up travelling the universe in the company of an alien with an enormous scarf and a swotty maths geek from another dimension" is, as excuses go, pretty lousy. Especially for one's first day on the job.

And while all that is happening, a white figure quietly watches. The Doctor goes to have a word with it eventually, and comes back in an extremely gloomy mood, telling Adric to prepare for the worst.

The TARDIS soon materializes on the dusty, cave-pocked planet of Logopolis, home of the maths monks. It is, we learn, an enormous analogue of a computer. A task is broken down into a series of calculations; each monk performs a single calculation and passes the result on to the next monk over. Operations are overseen by the Monitor (get it?) in a sort of large workroom. After reuniting with Nyssa, who is deposited on the planet by the mysterious white Watcher, the TARDIS crew finds the Monitor. He explains that the universe is actually well past its sell-by date, and is kept from flying apart into chaos only by the power of their mighty minds, as they use their "block transfer computations" to keep the universe together.

Of course, it's time for 'ol Koschei to show up and start mucking about with things. He starts small, with such pranks as shrinking the TARDIS (with the Doctor inside) and throwing a spanner into the endless work of Logopolis. Unfortunately, Logopolis can't be restarted once it's stopped, resulting in a rather large problem for those who still want to, you know, exist. The Master hadn't really counted on accidentally deleting much of the universe, and while Tegan and Nyssa are both horrified at even having to be near him (Nyssa, of course, especially because he nicked her father's body), the Doctor reluctantly agrees to try and help the Master fix the spreading entropy.

The Doctor tells Adric, Nyssa, and Tegan to enter the TARDIS, which he has arranged for the Watcher to pilot out of time and space so they will be safe. Tegan, however, still thinks the Doctor is the best bet for getting home and decides to disobey his order and follows him and the Master as they go to speak to the Monitor. The Monitor reveals to the two that there is a backup plan that might be able to save everything. The people had been completing a program that could automatize its operation, but before the Monitor can boot up the program, him and the computer equipment is swallowed by the entropy field. For a moment all seems lost, but the Doctor, however, realizes that they still have a chance; Logopolis' computer equipment was an exact copy of the Pharos Project, a giant radio telescope on Earth. The Doctor, the Master, and Tegan then escape from the disintegrating Logopolis in the Master's TARDIS, setting a course for Earth.

Adric and Nyssa, meanwhile, can only watch helplessly, as the encroaching entropy wipes out a potion of the universe and of course, because Nyssa's day can only get better, it includes Traken.

Landing inside Pharos Project, the Master and the Doctor eventually manage in cooperation to install the backup system and restore balance to the universe. But right on cue, the Master decides to double-cross the Doctor; he uses the radio telescope broadcast to a message to all intelligent life in the universe: submit to him or he will knock out the backup system and unleash the entropy field upon everything again.

After a chat with the Watcher inside the deepest parts of the TARDIS, Adric is able to follow the Doctor, and the ducklings cause enough of a distraction to allow the Doctor to muck up the Master's plans. Fortunately, this leaves the larger part of the universe intact. Unfortunately, the Master and the Doctor break out into a fight on top of the Pharos Tower. The Doctor sees visions of his worst enemies attempting to kill him. Clashing on the gantry, the two Time Lords wrestle to the floor. The Master gets up first and bolts to the controls of the telescope. He tilts the radar dish until the gantry completely flips over. Grabbing a cable and desperately trying to hang on to it, the Doctor sees several visions of his various enemies taunting him. Gradually, his strength begins to fail him, and finally his grasp slips. The cowardly Master runs away sniggering in his TARDIS after this cheap act of murder.

Dying, the Doctor has several soothing flashes back to his previous companions in that incarnation. The next thing he knows, he's surrounded by the trio of current companions who are quite worried about him, snapping him out of the daze. The Fourth Doctor simply gives them a serene glance and tells the group with an assuring smile, "It's the end... but the moment has been prepared for."

The Watcher approaches and merges into his dead body, and turns out to have been a time/space-transcending echo of his next incarnation all along. The Doctor regenerates into a young blond gentleman, who greets everyone with a smile. The Fifth Doctor starts his first day almost drowning in the sheer amount of coat and scarf he's wearing, not to mention chased by some very angry security guards.

"It's the end... But the moment has been prepared for."