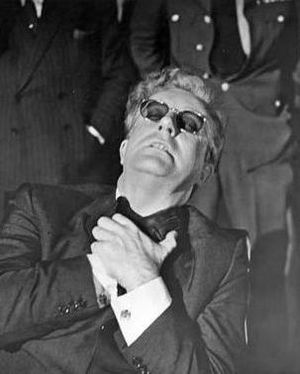 Mein Führer! I can't breathe!
"You do know you gave me an evil hand, right? I've been writing 'Kill, kill, kill' on everything. It's crazy. It's crazy! Anything could happen!"
— Lindsey McDonald, Angel
Advertisement:

A transplanted limb that has a mind of its own (usually, the original owner's). It may grant the bearer additional powers/abilities at first, but almost inevitably, it will try to completely take over its new owner. Artificial Limbs (like Arm Cannons)—despite not even having an original owner—may demonstrate this property, as well, by driving the owner into an Unstoppable Rage.

May also be a Red Right Hand.

There's quite a cultural basis for this effect: As humans, we've always been fascinated superstitiously by the way our own bodies work and where our own consciousness lies. Also Truth in Television as the brain condition known as alien hand syndrome can cause people to lose control of a limb, which is caused with damage to the corpus callosum, especially through split-brain surgery, previously used to end life-threatening epileptic seizures.

A subtrope of Organ Autonomy. No connection to The Night of the Hunter. If they can be removed or otherwise remain separate entities they can be an Attack Animal or Living Weapon.