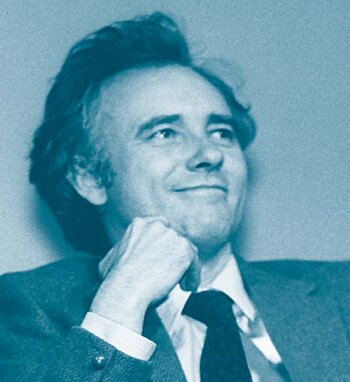 Christopher Hamilton Bidmead (born 18 January 1941) is an English screenwriter, best known for serving as script editor on Doctor Who from 1980-81.
Advertisement:

He joined the show at the start of Season 18, succeeding Douglas Adams as script editor. At the same time, John Nathan-Turner took over from Graham Williams as producer. Bidmead and Nathan-Turner had a very different take on the show from their predecessors, seeking to reduce the comedic and fantastical elements that had dominated the previous era and root the show more firmly in reality, with more hard science and a more serious tone.

This new approach led Bidmead to rewrite and make changes to many scripts that had been originally written with the previous regime's tone in mind, for example the season's opening story "The Leisure Hive" by David Fisher, which had originally been envisaged as a comedic parody of gangster movies.