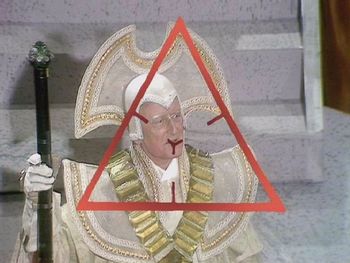 Get that triangle off the screen, pronto! What do you think this is, the Illuminati? At this rate, you'll give half the viewers triangle fever, triangle vision, or some other three-sided malady!
Through the millennia, the Time Lords of Gallifrey led a life of peace and ordered calm, protected against all threats from lesser civilisations by their great power. But this was to change. Suddenly and terribly, the Time Lords faced the most dangerous crisis in their long history...
— The Opening Narration, as read by The Doctor
Advertisement:
"Vaporisation without representation is against the constitution!"
— The Doctor protests his punishment

The one that pissed off Mary Whitehouse. note  OK, they pretty much all pissed her off, but this one in particular made her really irate. She made enough of a fuss that the BBC decided to let Philip Hinchcliffe go after this season, despite the high viewing figures and critical acclaim under his tenure and replace him with Graham Williams with orders to make the show Lighter and Softer.

Another Robert Holmes classic. This serial is important in that it is the first to take place entirely on Gallifrey. In addition, many details of Time Lord society are revealed for the first time: the 12 regeneration limit, the political system, the chapter houses (Prydonian, Arcalian, etc.), the swanky Time Lord regalia and their giant hats, the Sash and Key of Rassilon, the Eye of Harmony, and the Matrix. The story also introduced the Doctor's mentor Borusa and, perhaps most notably, mentioned Rassilon for the first time. Bernard Horsfall (last seen as the Time Lord who sentenced the Doctor to exile in "The War Games") returns as Chancellor Goth.note Though the casting wasn't entirely deliberate, there's nothing to indicate that it's not the same character, and one small hint that it is. And anyway, the subtext is just too good to ignore, so the stories in other media take this and run with it And finally, the Master returns, played by Peter Pratt. Judging from the Master's atrocious complexion, he's seen far better days since the last time he appeared and will, in extended universe audios, appropriately enough become known as "The Crispy Master".

This story is also known for having no companions. Ultimately, this proved the companion's use as The Watson, as it was hard to convey the Doctor's thoughts without someone for him to explain them to. The post-2005 stories with no regular companions tend to have a guest character filling the role temporarily, with the exception of "Heaven Sent", where the Doctor spends the majority of the episode by himself and which can be seen as a spiritual successor to this serial.

This four-episode serial first aired from October 30 to November 20, 1976.

Summoned to Gallifrey and with no companion at his side, having dropped Sarah Jane Smith off on Earth, the Fourth Doctor gets a surprise Flash Forward when he sees himself assassinating the Lord President. He tries to stop it from happening: he sees someone else aiming to assassinate the Lord President, and picks up a suspiciously-conveniently located gun to shoot the assassin. But the gun's scope has been tampered, so he misses the assassin, the president is shot — and the Doctor is the one seen holding a smoking gun. He is promptly arrested by Chancellor Goth.

However, it becomes apparent that this is a plot by the Master— having been reduced to a skeletal husk during the interim since we last saw him, only kept alive through the power of his burning hatred, his flesh rotting almost literally to the bone and causing him constant agony, he wants to get his hands on the Key and Sash of Rassilon: the Presidential regalia.

The Doctor escapes execution by virtue of Loophole Abuse (to everyone's annoyance) and becomes a Presidential candidate, granting him immunity for a few days. He is able to demonstrate that the sights on the gun he was using were tampered with to a degree that would make it impossible to hit a target, convincing at least a few of the other Time Lords of his innocence. The only other candidate is Chancellor Goth. The Doctor convinces a few sympathetic Time Lords to hook his brain up to the virtual reality of The Matrix (no, not that one). The Matrix is a knowledge database, which is made up of the Virtual Ghost brainwaves of dead Time Lords.

Inside the virtual reality of the Matrix, the Doctor fights a hallucinatory masked opponent who hunts him down with trains, planes, hypodermic needles, guns and poison (no automobiles, for those curious). He loses about half his wardrobe in the process, gets all dirty and bloody, and when the mysterious hunter is revealed to be Chancellor Goth, the two end up mud-wrestling in a pond and ripping each other's clothing off, during which the Doctor nearly gets drowned— getting Philip Hinchcliffe kicked off the series in the process thanks to one Mary Whitehouse getting even more pissed off at the show's content than usual. The Doctor, meanwhile, eventually proves victorious, only for the Master to intervene and attempt to fry both the Doctor and Goth within the Matrix. The Doctor survives and is brought back to reality, but Goth is much less fortunate and the Master already has the regalia.

The Master begins opening the legendary Eye of Harmony, the core of a black hole, which was discovered by Rassilon during the foundation of Time Lord society. He's stopped by the Doctor and falls into a fissure. The Doctor is left as the only surviving presidental candidate but no-one actually mentions that and Borusa is quite happy to let him slip away, followed shortly afterwards by the Master, whom the Doctor believes to have died.

Part Three of 'The Deadly Assassin' was censored after complaints from Mary Whitehouse of the National Viewers' and Listeners' Association. As the master tape itself was edited, this affected all future airings until the Home Video release, where it was reconstructed from a lower quality source.

This comparison comes from the DVD's 'Making-of' documentary.

Example of:
Edited for Syndication

Part Three of 'The Deadly Assassin' was censored after complaints from Mary Whitehouse of the National Viewers' and Listeners' Association. As the master tape itself was edited, this affected all future airings until the Home Video release, where it was reconstructed from a lower quality source.

This comparison comes from the DVD's 'Making-of' documentary.