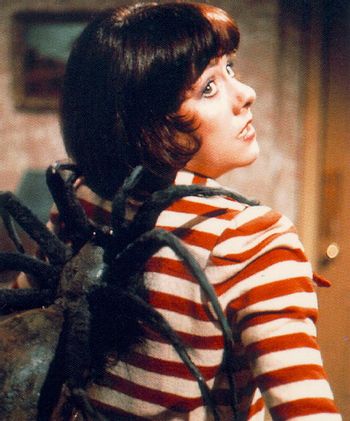 "Daughter of London... there is something on your back."
"Is that fear I can feel in your mind? You are not accustomed to feeling frightened, are you Doctor? You are very wise to be afraid of me!"
— The Great One
Advertisement:

The one with the very long chase sequence. And SPIDERS!!!

The final adventure of Jon Pertwee as the Third Doctor, rounding off his tenure after five seasons, twenty-four stories and 128 half-hour episodes. Also the last appearance of Richard Franklin as former Captain Mike Yates. It is also the first story to introduce the term "regeneration" to refer to the Doctor's changes in appearance, and define many of the rules behind the process.

Written by Robert Sloman and Barry Letts (uncredited, as usual). This six-episode serial first aired from May 4 to June 8, 1974.

Sarah Jane visits her friend Mike Yates at a crypto-Buddhist retreat in the English countryside. Some of them have apparently been skipping meditation lessons to hang out in the basement and summon ENORMOUS FREAKING SPIDERS from Metebelis III, a world ruled by the terrifying things. As if enormous spiders weren't bad enough, these are enormous telepathic mind-controlling spiders, and one of them takes over a resident named Lupton and turns him into a spider-puppet. Naturally, they have designs on our world; but their chief aim at the moment is the recapture of a blue crystal prism thingy. Conveniently enough, the Doctor has just received one in the mail! It's from Jo Grant, who he gave it to back in "The Green Death".

Lupton follows Sarah Jane back to UNIT HQ to steal the Metebelis crystal, using mind-thrown lightning bolts to get past security. Awesome. Psychic powers so rarely come with offensive capabilities. A completely badass hovercar vs. helicopter chase ensues, but the guy gets away. The Doctor and Sarah Jane deduce who the thief must have been, and head back to the retreat—but by then Lupton has misplaced it.

The evil monks turn a mandala into a portal to Metebelis III, and Lupton goes through. Sarah Jane, who really should know better than to step into glowing circles on the ground, finds herself there as well. She tries to foment glorious revolution amongst the human proletariat, but their arachnid overlords promptly arrive to put an end to that. She is saved by the timely intervention of the Doctor—who's used the TARDIS and the crystal to get to Metebelis III himself—the spiders attack him, leave him for dead, and go back for reinforcements. Soon after, the Doctor and Sarah are both captured and end up back at Spider HQ, where they have obviated prison cells by the simple expedient of swaddling their prisoners in spider silk.

The Doctor wiggles out of his cocoon, frees Sarah Jane, and decides to put the crystal back into the cave where it was found in the first place, on the theory that it will placate the intelligence that spawned it. But the radiation will surely kill anyone who enters the cave! If only there were some brave hero willing to sacrifice his life to replace the crystal!

No, it isn't a hero that needs to complete this mission. It's an atonement for a past mistake from a humbled Doctor, despite knowing that this will be his last act to make up for being a self-serving codger for a sizable part of his life in this incarnation. He finally steps in and makes a Heroic Sacrifice to prove he has a heart of gold. Prepared for the worst, the Third Doctor decides to face his fears and endure the punishment for his greed that day he took the crystal. He finds the Great One wants her mental abilities to reach infinity, and she snatches the Metebelis crystal to complete its psychic web circuit as a keystone, which is now irradiating the Doctor to a devastating effect. Except, the Great One is so power blind she ignores the Doctor's warning that her mind can't handle that much power. When she foolishly activates the circuit anyway, the power intake overloads the Great One's brain, until she explodes, causing the rest of the Eight Legs to writhe in pain and die off. Visibly anguished, the Doctor stumbles back to his TARDIS, reeling from excessive radiation exposure.

The Third Doctor returns to Earth several weeks late from his departure. He quavers out the doors of the TARDIS, unable to even stand without huddling to the frame of his ship. Losing his strength, he falls to the ground faced down. The Brig gets a seat cushion to prop up his head while Sarah turns him over on his back, grieving at the sight of her Doctor's last moments. The poor gentlemen is on his deathbed after getting lost in the Time Vortex. He weakly tells his companion what he had to do, but she won't accept his death. Starting to cry, the Doctor tells her "A tear, Sarah Jane? No, don't cry. While there's life, there's..." But the word "hope" does not escape his lips. He dies as though he just froze in place as the radiation stopped every process of his body from working, including speech and his eyelids, which Sarah closes.

But the utterance of hope that the Doctor couldn't gasp out before his demise shows up in the form of K'anpo Rimpoche. Sarah learns the Doctor isn't so dead after all, because the wise Time Lord sees that his old friend needs a "push" to make his cells regenerate. Sarah didn't know what the Doctor meant by regeneration when he first spoke of it, and is a mite confused at what is going on. But the Brigadier has dealt with this change of appearance before. A bit diffused by the idea the Doctor is going to have a personality tilt again after two oft incorrigible faces, he resignedly says, "Well, here we go again..." Jon Pertwee fades away.

Oh if only we had a Doctor that could start larking about the Pythagorean Theorem and let us know all was well. One who did not make us think his death would stick...

One who could, if he were to die, regenerate into arguably the most iconic Doctor of all time...