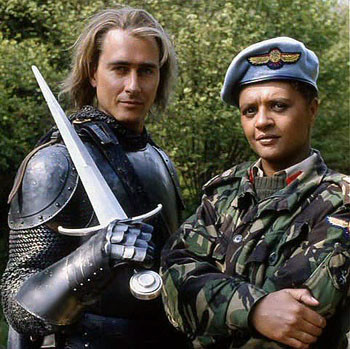 An incredible badass. And her boyfriend.
The Destroyer: Pitiful. Can this world do no better than you as their champion?
Brigadier Lethbridge-Stewart: Probably. I just do the best I can.
Advertisement:

The last one with the Brig. Well, in the main show, at least.

Two great British institutions meet at last, as Doctor Who delves into the King Arthur stories to begin the final classic season.

The Doctor and Ace follow a signal of some sort to arrive 20 Minutes into the Future (a Shout-Out to the tradition of having UNIT stories set in a non-specific near future). They land near an archaeological dig somewhere in England and try to hitch a ride to the dig — the source of the signal — from a UNIT convoy passing through with a nuke (Not ones to learn from experience, are they?), but are left in the dust.

Fortunately, archaeologist Peter Warmsly, the guy in charge of the dig, is nicer and does give them a lift. Though he's just as baffled as they are about the whole UNIT nuke thing. UNIT, led by new brigadier Winifred Bambera, is equally weirded out by the people claiming to be "the Doctor" and "Liz Shaw" (the only other UNIT pass the Doctor could find in his clothes), and decides to recall Brigadier Lethbridge-Stewart out of retirement and into active duty. The Brigadier's wife, Doris, is less than thrilled.

The Doctor, Ace and Warmsly repair to a watering hole / hotel, where Warmsly bitches about the UNIT hardasses and Ace spends £10 on a lemonade. She also befriends a girl named Shou Yuing. Meanwhile, someone is performing a magic ritual of some sort that

Then Pat the innkeeper hears his microbrewery go boom, and the crew rushes to investigate, where they find... a knight in armour. Who looks up at the Doctor and goes "Merlin!"

As it turns out, the Doctor will become known as Merlin at some point in a future regeneration, and he'll have to pretty much wing this adventure — as he has no clue yet how the first half of it will go. He does find a lot of notes, hints, contraptions and archaeological evidence left for him by his future self. Also, the Brigadier brought Bessie!

The next day, the Doctor and Ace dragoon Warmsly into taking them down to the dig. There, the Doctor quickly translates a mysterious inscription as "Dig hole here"; which, he says, he knows, because it's in his own handwriting. Then he tells Warmsly to stand guard while he and Ace investigate the hole, which leads to a tunnel, which leads to a spaceship under the lake. It houses Excalibur, which Ace promptly decides to guard.

While Bambera and the knight (Ancelyn) get into a fist fight and subsequently get their flirt on, the Doctor sets about convincing Morgaine to stop trying to nuke the planet. Things get a little bit complicated when Morgaine decides to summon an Eldritch Abomination to help her out — but luckily, Brigadier Lethbridge-Stewart is willing to make a Heroic Sacrifice and shoot it back to hell. He survives, too, because the writers love him (we do too, so it's okay).

Episode 1 was the lowest-ever rated episode of Doctor Who, with just 3.1 million viewers.