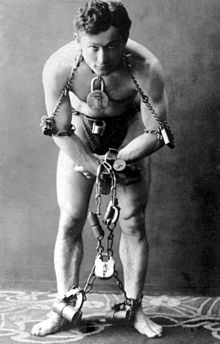 A native of Budapest, he moved with his family to the U.S. as a child. The preeminent Stage Magician of his time and the greatest Escape Artist of all time, Houdini (who based his stage name on the French magician, Jean Eugène Robert-Houdin) was one of the great entertainers in Vaudeville and became one of the highest paid in the industry. He also accepted dares to see if he could escape various police jail cells, secure transports and personal restraints, and usually did, and sometimes while nude to "prove" he wasn't carrying tools.note In reality, he was often hiding them in the back of his throat, and could cough them up at any time. Authorities noted that they were very lucky he never decided to turn his talents to crime, as it would be impossible to keep him imprisoned.

In addition to stage craft, Houdini also starred in films although that career path proved unsuccessful and even had some notoriety as an airplane pilot, doing the first flight in Australia.note Though some Australian aviation historians dispute whether he was indeed the first.

Houdini married his stage partner Wilhelmina Beatrice "Bess" Rahner three times. Once in secret and then once in each of their houses of worship, as Houdini was Jewish (the son of a rabbi) and Bess Roman Catholic.

Houdini had some interest in the supernatural, but was disgusted to find the only ones available were frauds. As a result, Houdini dedicated himself to debunking claims of the paranormal by infiltrating seances to expose the fakery and showing how the fakers did it on stage. It cost him his friendship with believer Sir Arthur Conan Doyle who was seriously convinced that Houdini actually had paranormal powers and nothing Houdini could say or do would change that in his eyes. All the while, Houdini dearly hoped to find the real thing in this crusade and even arranged a secret signal that he would try to use after he died. After his death, his wife would regularly do seances trying to contact him until she gave up in 1936, saying "Ten years is enough for any man."