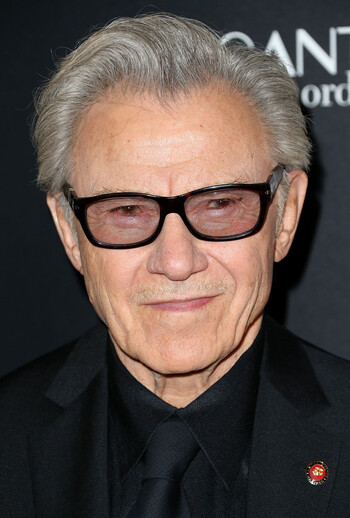 "I mean, you work and you try and find the work that suits you the best and you enjoy the most."
Advertisement:

Consummate badass actor Harvey Keitel (born May 13, 1939 in Brooklyn, New York City), has been acting in films since 1967. He also played Gene Hunt in the American version of Life On Mars; much like Philip Glenister in the British original, he was the best thing on the show. A former United States Marine, he is frequently revered as one of cinema's greatest actors for badass roles that nevertheless require emotional range, possibly equaling Robert De Niro despite his lack of awards.

Interestingly, mathematical research has proven him to be the center of the Hollywood universe. No, not Kevin Bacon (Bacon is still pretty close, though; he's in the 99th percentile). He only recently took over from the late Dennis Hopper.