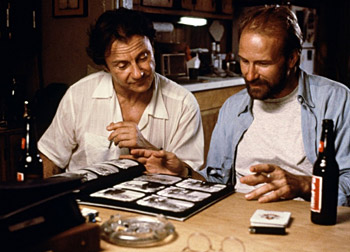 Paul: It's 1942, right. He's caught in Leningrad during the siege; I'm talking about one of the worst moments in human history. 500,000 people died in that one place. And there's Baktin, holed up in an apartment, expecting to be killed any day. He has plenty of tobacco, but no paper to roll it in. So he takes the pages of a manuscript he's been working on for ten years, and tears them up, so he can roll his cigarettes.
Advertisement:
Rashid: His only copy.
Paul: His only copy. (Beat) I mean, if you think you're gonna die, what's more important, a good book or a good smoke?

Followed later that year by a spin-off movie, Blue in the Face.