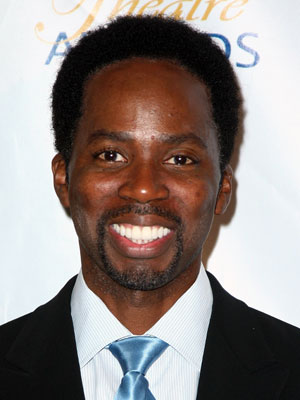 Harold Perrineau (born August 7, 1963 in Brooklyn, New York) is an American actor. He's perhaps best known on film for his Star-Making Role as Rashid in Smoke and his scene-stealing turn as a cross-dressing Mercutio in Baz Luhrmann's William Shakespeare's Romeo + Juliet adaptation. On television, he garnered critical acclaim in the infamous HBO prison-drama Oz where he played disabled inmate and narrator Augustus Hill.
Advertisement:

Perrineau has been a regular face in film and television, and unlike many character-actors has avoided being typecast as one particular character or in one particular genre. He's been in light-hearted comedies, hard-hitting dramas, schlocky B-movies and genre-bending TV shows. His best-known recent roles would be Michael Dawson in Lost, Damon Pope in Sons of Anarchy and Link in The Matrix.

Actress Aurora Perrineau is his daughter.