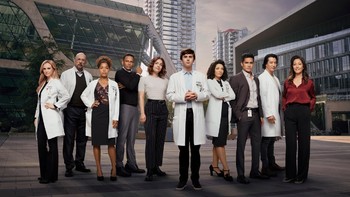 The Good Doctor is a Medical Drama that premiered on ABC in 2017. It is based on a 2013 South Korean drama, Good Doctor. David Shore (House) is the showrunner.

Dr. Shaun Murphy (Freddie Highmore) is a young autistic surgeon with savant syndrome, from the mid-size city of Casper, Wyoming, where he had a troubled childhood. He relocates to San Jose, California, to work at the prestigious San Jose St. Bonaventure Hospital. Alone in the world and unable to personally connect with those around him, but also a quick learner with extraordinary medical skills and intuition, Shaun is strongly supported by his mentor, Dr. Aaron Glassman (Richard Schiff), who challenges the prejudices of the hospital's board and staff, specially Dr. Neil Melendez (Nicholas Gonzalez) and Dr. Marcus Andrews (Hill Harper). Shaun quickly finds a friend in surgical resident Claire Browne (Antonia Thomas), starts to gain the trust and respect of his co-workers, and ends up having a very complicated relationship with his neighbor, Lea Dilallo (Paige Spara).

No relation to the 2011 Orlando Bloom film of the same name, or to the Neil Simon play based on Anton Chekhov's stories.

The Good Doctor contains examples of the following tropes:

Afterwards, Glassman and Debbie began serving as this trope for the first half of Season 3.