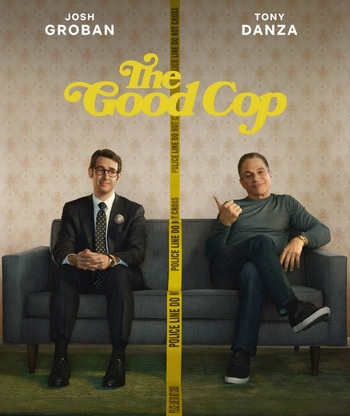 The Good Cop is a Netflix comedy series, starring Tony Danza and Josh Groban, which premiered on September 21st, 2018 and ran for a single season. It is a Foreign Remake of the Israeli TV series of the same name.

The show revolves around the relationship between Tony Caruso, Jr. (TJ), a straitlaced NYPD detective, and his father, Tony Caruso, Sr., a corrupt former NYPD detective. While TJ tries to seek justice for murder victims, Tony invariably finds himself entangled in the plot somehow and tries to take advantage of these situations to help out and try and redeem himself in his son's eyes.

Rounding out the cast are Cora Vasquez, newly minted detective in TJ's unit and Tony's former parole officer, Burl Loomis, a veteran detective who tries to exert himself as little as possible, and Ryan, a nerdy NYPD tech expert.

A sub-plot throughout the first season is Tony and TJ's shared desire to find more information about the death of Connie, Tony's wife and TJ's mother.