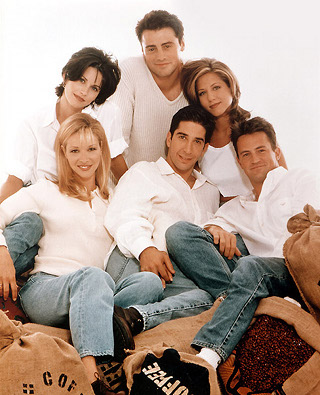 Can you remember what color the chick and the duck were?
"You know, people were whiter back then."
— Joel, Mystery Science Theater 3000
Advertisement:

You're watching your favorite sitcom — it's fluff, but it's harmless fluff, right? And you're laughing at the latest antics of the cast, when all of a sudden it hits you — "Are there any Black people in New York City?"

You've just run across a program guilty of Monochrome Casting. The melanin content of the actors simply doesn't vary much at all. Almost all of these programs consist of either an all-Black or all-white cast (shows with all-Asian or Hispanic casts are usually set and produced in countries where they're by far the dominant ethnic/racial group).

It is close to becoming a Discredited Trope — a product of the Leave It to Beaver era — but it still holds more sway than people at large realize. Most often, this trope is seen in sitcoms, where it is used to help target a single demographic.

Sometimes you'll get a Token Minority or Token White appearing in a walk-on role in the show; if he's a Black man on a white show, then he's probably there for a Very Special Episode about racism.

Now, some shows are set in environments where it might even seem forced to have any sort of ethnic diversity; this trope doesn't apply to these programs so much. For instance, the rarified world of the superwealthy that often dominates in Soap Operas really doesn't have many Black people or Latin Americans (except as servants, and that might be a little too real); likewise, the Chicago public-housing projects displayed in Good Times were pretty much all-Black by the time the show aired in the 70s. Similarly, Europe was almost all-white until the past two or so centuries (and many parts still are, especially in the East), and there are small towns in rural America that just don't have much in terms of diversity. In some countries, such as Japan or South Korea, ethnic homogeneity is practically state policy. It's when a show exists in an environment like New York or London note which started becoming really racially diverse since the 1960s, where diversity would be almost mandatory, that they can be guilty of monochrome casting.

Historically, Monochrome Casting was (at least in part) often the fault of Executive Meddling, either overt or covert. Before about 1965, it was standard for television stations and movie chains operating in the southern US to edit movies and TV shows to remove non-stereotypical African-American characters. Maids and criminals were fine, scientists and soldiers were not. If an African-American character was so intrinsic to the show that he or she couldn't be edited out, the show or movie simply wouldn't be shown in the South. note A strong contender for Crowning Moment of WTF came in May 1970, when a Mississippi state commission voted that the state's public networks would not air Sesame Street, stating that "Mississippi was not yet ready" for the show's integrated cast. This naturally would cut into profits, so producers tended to make the entire cast white. One of the first shows to challenge this was Hogan's Heroes, whose producers cast a Black actor as Hogan's second-in-command/camp genius specifically to make it impossible for Southern stations to edit the character out.

However, sometimes Monochrome Casting is more understandable in older works, due simply to demographic changes. In 1940, for example, only 1 in 10 Americans were nonwhite; now it's between 1 in 4 and 1 in 3, depending on who counts as "nonwhite." So, statistically speaking, one could show nine white characters in a 1940 film or 2 or 3 white characters now and maintain plausible deniability.

Many older films and shows and whatnot actually didn't have this trope in their day, if only because there were many more social factors dividing people than just race. A story from the past showing, say, rich people and poor people socializing freely, or Catholics and Protestants getting along, or Irish-Americans and Italian-Americans actually not wanting to kill each other (as they did in countless Mob movies), is in a way not this trope, at least if the diversity was the work's main theme and there was no reason for it to be more diverse still. Where Monochrome Casting is most noticeable is in works where the characters are homogeneous in every way: race, national origin, income level, political and cultural values. Either that, or they just seem so similar that any differences among them effectively don't matter.

Contrast People of Hair Color. Compare Humans Are White, a similar phenomenon in unrealistic works. Contrast the Five-Token Band, where it seems the writers were trying too hard in the opposite direction. Compare to White Male Lead in which, while the cast is ethnically diverse, the main character and Audience Surrogate is still white. May overlap with Pop-Culture Isolation. Compare Plenty of Blondes. Compare Chromosome Casting, the equivalent of this trope in sex (when characters of only one sex appear in a work).