Series / One on One 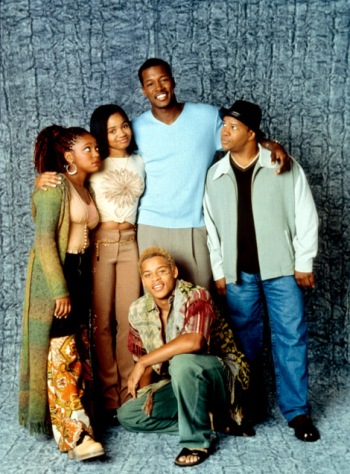 The show follows the lives of Flex Washington (Flex Alexander) and his teenage daughter Breanna Barnes (Kyla Pratt). The series begins with Breanna wanting to stay with her father, Flex, whom Breanna used to see only two weeks a year. When he blew out his knee during an NBA game, Flex had his communications degree to fall back on and became a sportscaster.note The former detail was revealed by Flex in a later episode.

Flex works for the fictional WYNX-TV in Baltimore, resides in the ultimate bachelor pad, and lives the life of luxury. He is a ladies' man who wants to be both a responsible parent and a best friend to Breanna. Flex is very protective of his daughter, especially with boys. He has only had a couple of serious relationships, one of which was Breanna's mother Nicole Barnes (Tichina Arnold), whom he impregnated at the age of 18. When Nicole takes a job in Nova Scotia, Nicole allows Breanna to live with Flex.

Flex's best friend and Breanna's godfather, Duane Odell Knox (Kelly Perine), is a used car salesman and a constant presence in their lives for better or worse. Breanna's best friend is Spirit Jones (Sicily Sewell) with whom she creates some mischief. Her other best friend, Arnaz Ballard (Robert Ri'chard), is the object of her on-again, off-again affection.

The show underwent a notable retool in the fifth season, with Flex reduced to a recurring character with the show instead focusing on Breanna and Arnaz after they moved to Los Angeles. The show would also launch a spin-off titled Cuts.

One on One theme

Theme song sung by Shanice and Tonex about a single dad and his daughter living together.

One on One theme

Theme song sung by Shanice and Tonex about a single dad and his daughter living together.