Film / One on One 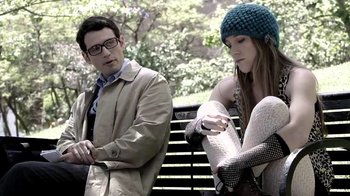 One on One (a.k.a. One on One: A Superman Story) is a 2012 fan-made short film written and directed by Jake Thomas, and starring Erin Brown and John Nagle, originally debuting on YouTube on September 29th, 2012.

Set in the Superman Universe, the short film follows the story of an unnamed runaway girl, who visits a park in Metropolis. While there, she is engaged in conversation with a reporter named Clark, who claims to be writing a human-interest story, and wants to interview her. Through their conversation, Clark forces the girl, whom they agree to call "Sarah", to reexamine her faith in humanity. The title refers to their conversation, which takes place entirely on a park bench, with no other characters appearing.

One on One provides examples: