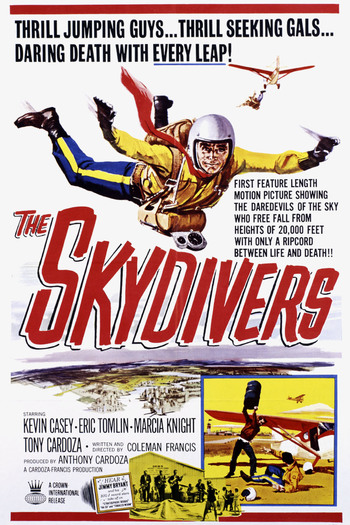 Described by Mystery Science Theater 3000 as "like Manos without the lucid plot," The Skydivers (1963) is less a horror movie and more a very dull soap opera about the employees of a small parachuting club.

The "plot" involves the eponymous skydivers getting away from their bland, loveless marriages with bland, loveless affairs, watching Coleman Francis's extended family go-go dancing, and either killing, dying, or suffering total mental breakdown as a result of all the deaths. They even skydive, occasionally.

Apparently to make up for the almost dialogue-free The Beast of Yucca Flats, the film consists almost entirely of stilted dialogue punctuated by midair footage of parachutists. That would be fine, if the dialogue wasn't all like this:

Beth: Do you want some coffee?
Joe: Coffee? I like coffee!
Advertisement:

For tropes and specifics relating to the MST3K version, please see the episode recap.