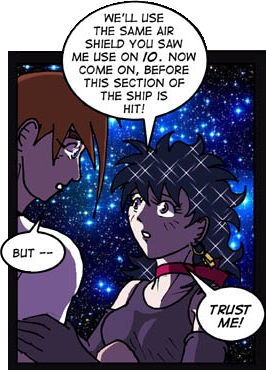 "Trust me" are the two most romantic words in the English language.

Rozalin: ...Y-you... You are really going to trust me? I am the daughter of Overlord Zenon. I am a demon, and you intend to kill my father. What part of that equation gives you the notion that you can trust me!? Are you mocking me?
Adell: No, no. I'm not. It's just that... I promised myself that I would trust you. And you know how I am with promises...
— Disgaea 2: Cursed Memories
Advertisement:

Trust is a rare commodity. And we mean the premium stuff, not the dime-a-dozen trust the Horrible Judge of Character dishes out. When someone is trusted by another person, it feels good and may even strengthen the one trusted, like benefiting from a small scale Combined Energy Attack or Heroic Resolve. Those so trusted will feel obligated to live up to that trust, giving the proverbial extra 10%, or sticking with the truster through hell or high water.

When the Power of Trust is directed at a morally neutral or gray-black character, it makes them feel good in an uncomfortable way... the kind that makes them have to suppress the urge to Pet the Dog. This is one of the things that can make bad guys like The Mole switch sides. (Sometimes they will backslide. However, telling them Remember That You Trust Me can neutralize that effect.)

In the right setting it can act as strongly as The Power of Love or Friendship. Of course, in darker and more cynical series, the Love Martyr and Horrible Judge of Character will think this is enough to change someone and be proven wrong rather painfully. In certain settings, insulting the one who instills the Power of Trust in front of the trustee may be a Berserk Button.

Because Children Are Innocent, they can wield this without even noticing it. Kill Me Now, or Forever Stay Your Hand runs on this.

Even if In the End, You Are on Your Own, the Power of Trust an ally bestows can be just as good as their physical presence.

See Turn the Other Cheek, I Gave My Word. Compare Career-Building Blunder, which builds on this.

See also Undying Loyalty, which can be an end result of this. When trust runs deep, you have friends for life.

Contrast You Lose at Zero Trust.

Owen learns he has to stop micro-managing his workers and trusts that they can do the job. His trust in Elwood allows him to successfully complete the job.

Alternative Title(s): The Power Of Trust

Owen learns he has to stop micro-managing his workers and trusts that they can do the job. His trust in Elwood allows him to successfully complete the job.