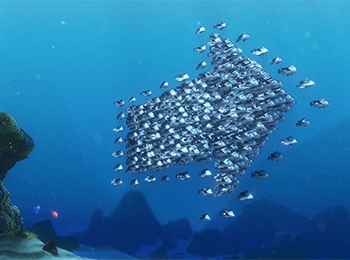 Those rehearsals clearly paid off...
"Curse you Plankton, and your ability to join together to form a working human ear!"
— Mr. Krabs, SpongeBob SquarePants
Advertisement:

It's a common sight gag in humorous animation that fish, insects and other swarms have an amazing ability to coordinate movement into very exact shapes. This is especially impressive with fireflies in the night. In older Western animation, this is especially common when swarms of bees appear.

This one is interesting because you can see a little bit of how it works. The idea of fish schooling up to form words is pretty ridiculous, but because we are used to seeing schools of fish performing coordinated movements, we can easily suppress disbelief and accept a more complex and coordinated version of a real phenomenon. Ditto, the flocking of birds, insects, etc.

This is kind of Truth in Television as real-life swarms/schools/flocks can move with amazing coordination, and maintain a shape (usually a sphere or some other simple geometrical pattern) even when disturbed.

When the swarm looks and acts like a single living thing, it overlaps with The Worm That Walks. When it's bees (or other stinging insects like wasps or hornets) that are swarming, it overlaps with Scary Stinging Swarm. Expect this to happen if someone disturbs or walks into the Hornet Hole.

Whilst wandering off from his team, King Shark stumbles across a school of fish who respond to him. King Shark takes this as a note that they're to be his "new dumb friends". Unfortunately...

Whilst wandering off from his team, King Shark stumbles across a school of fish who respond to him. King Shark takes this as a note that they're to be his "new dumb friends". Unfortunately...