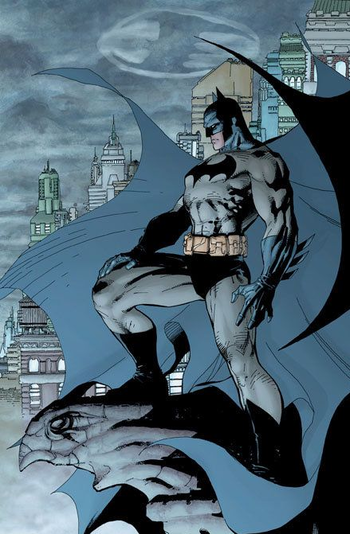 "Criminals are a superstitious, cowardly lot..."
"I am vengeance. I am the night. I… am… BATMAN!"
— Batman: The Animated Series, "Nothing to Fear", written by Henry T. Gilroy and Sean Catherine Derek.
Advertisement:

The Dark Knight. The Caped Crusader. The World's Greatest Detective. The Most Dangerous Man on Earth. One half of The Dynamic Duo.

The Cowl of The DCU.

Created by Bob Kane and Bill Finger (who until 2015 was uncreditednote The New '10s led to DC finally negotiating official acknowledgment for Finger who is now considered the major creative force of the character), Batman

is also one of the greatest Trope Makers and Trope Codifiers in not just comics, but all visual media; one of the oldest superheroes still in print — having debuted in Detective Comics #27 (May 1939) — Batman is one of the three best-known superheroes ever (alongside Superman and Spider-Man), one of the flagships of DC Comics and one of the most popular comic book characters ever created.

In addition to this appealing and (for its time) unique origin story, Batman has an iconic supporting cast and, more crucially, the single largest and most iconic Rogues Gallery in all of comic book history, as well as one of the most beloved. Many of them are up there with the Dark Knight himself in terms of pop culture relevance and recognition. While his Arch-Enemy, The Joker, is the most recognizable, villains such as Harley Quinn, Two-Face, The Penguin, The Riddler, Catwoman, Poison Ivy, Bane, The Scarecrow, and Mr. Freeze are recognizable even to those with only the most basic knowledge of comics. Over time, many of his enemies began to be written as dark reflections of certain aspects of Batman's personality, such as The Joker with overall sanity, Two-Face with duality and identity, Scarecrow with the use of fear, etc..

Along with Superman and Wonder Woman, he's one of the Big Three of The DCU. He has also been a member of the Justice League of America on and off (mostly on) since its founding.

open/close all folders
Various parts of the franchise have provided the name for:
General trope examples: