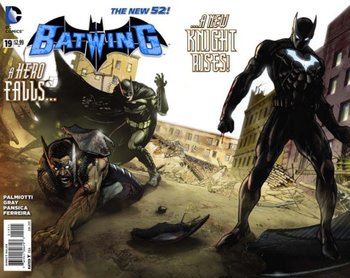 Batwing was a short-lived series written by Judd Winick and drawn by Ben Oliver, one of the early titles in DC's New 52 lineup. Spinning out of Batman (Grant Morrison), the series initially followed the exploits of David Zavimbe, the Batman of Africa, as he tried to fight crime in the Democratic Republic of the Congo. Later, the series was retooled, and the mantle was taken up by Luke Fox, the son of longtime Batman ally Lucius Fox.
Advertisement:

Not to be confused with Batman's plane.