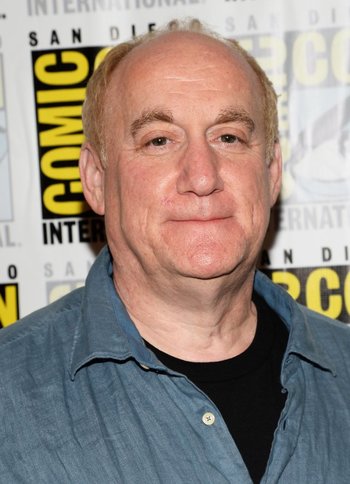 Joseph "Jeph" Loeb is a comics/film writer and TV producer. He started as a co-writer of Teen Wolf, then wrote Commando and a few other movies. While working on the script for The Flash movie, he got an opportunity to write for DC Comics.

The most acclaimed stories from his first foray into comics were the critical hits Batman: The Long Halloween (one of three titles that were inspiration for Batman Begins), Batman: Dark Victory and Superman for All Seasons, which he created with artist Tim Sale. Later, also with Sale, he wrote three mini-series for Marvel Comics, Spider-Man: Blue, Daredevil: Yellow, and Hulk: Gray each telling early stories of the title characters, revolving around their relationships with now dead Love Interests (respectively Gwen Stacy, Karen Page and Betty Banner).

One of Loeb's greatest successes was bringing his children — Sam and Audrey — into comics. Loeb was also a producer and writer for Smallville, Lost, and Heroes. Back at DC, he created Batman: Hush with Jim Lee and started another Superman/Batman ongoing series where he reintroduced Post-Crisis Supergirl in The Supergirl from Krypton (2004). He got multiple awards, including the Eisner Award for a Batman and The Spirit crossover. But then later, his son was diagnosed with cancer, and then later died at the age of 17 after a three-year battle.

Jeph, who had already left Smallville to take care of Sam, finished his son's last comics story together with many writers and artists, and published it in Superman/Batman. Then he decided to retire from comics. However, his friend, Marvel Editor-In-Chief Joe Quesada, convinced him to come back and write for him.

But Jeph, understandably, wasn't the same man he was before. While his titles always had flaws — Critical Research Failure and Continuity Snarl among others — after coming to Marvel, his work was quickly criticized by many fans as some of the worst in living memory. Fallen Son: The Death of Captain America, where superheroes come to terms with the death of Captain America is considered the best of these recent works. His runs on Wolverine and Hulk are infamous among most fans for introducing two villains who, confusingly, predate the origins and adventures of the main characters — Romulus and Red Hulk. His run on The Ultimates, The Ultimates 3, has been labeled as full of Character Derailment and Ultimatum is generally considered to rival Countdown to Final Crisis, Amazons Attack!, and Justice League: Cry for Justice in terms of quality. He was also forced to leave Heroes because NBC didn't like the course of the story (and because according to some, Loeb was stealing series writers for Ultimate Marvel). His run on Nova has been fairly well-liked.

Loeb has since taken over as the head of Marvel's animated division, acting as an executive producer for Ultimate Spider-Man (2012) and the second season of The Avengers: Earth's Mightiest Heroes!, the former of which has developed a serious Broken Base. He is also producing Hulk and the Agents of S.M.A.S.H. and Avengers Assemble, the latter of which is heavily influenced by Joss Whedon's The Avengers film. He also oversees the television division of the Marvel Cinematic Universe, executive producing Marvel's ABC shows (Agents of S.H.I.E.L.D. and Agent Carter), as well as their Netflix ones (Daredevil, Jessica Jones). However, Loeb stepped down from this position following the 2019 promotion of Kevin Feige, who will now oversee all of Marvel's television output.

Another factor may be Loeb's alleged racism. Peter Shinkoda, who played Nobu in Netflix's Daredevil, has accused Loeb of racist comments, specifically anti-Asian comments and of derailing the story of the team up mini-series The Defenders due to said racist beliefs. However, until futher info is available, that's all that's going to be said on the topic. He shares his workplace with Geoff Johns and Allan Heinberg.

Comic-Book properties Loeb has worked on include:

Television shows that Loeb has been involved in include:

Movies that Loeb has been involved in include:

Tropes asssociated with Jeph Loeb and his works: