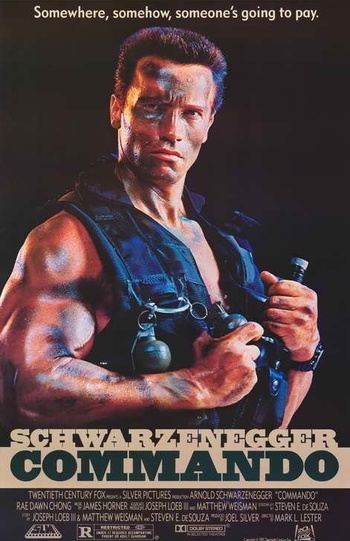 You can't get much more macho than this.
Cindy: You steal my car, you rip the seat out, you kidnap me, you ask me to help you find your daughter, which I very kindly do, and then you get me involved in a shoot out where people are dying and there's blood spurting all over the place, and then I watch you rip a phone booth out of a wall, swing from the ceiling like Tarzan, and then there's a cop that's going to shoot you and I save you and they start chasing me! Are you going to tell me what's going on or what?!
Matrix: No.
Advertisement:

Commando tells the story of John Matrix (Arnie), a retired special forces colonel whose daughter (Alyssa Milano) is kidnapped. To get her back he must assassinate the president of fictional South American country Val Verde, at the behest of The Generalissimo that he deposed. Naturally, he simply decides to ignore these demands and just sets out to kill them all and rescue her instead.

Best known for Schwarzenegger displaying his distinctive tongue-in-cheek action film humor for the first time (as opposed to Conan the Barbarian and The Terminator, who were both The Stoic).

In 2008, a Russian remake of the movie was released called "День Д" (D-Day), starring Russian superstar Mikhail Porechenkov in the lead role as former paratrooper Ivan* which is the Russian equivalent of "John". Roughly 80% of the movie is a shot-for-shot recreation of the original version, though some scenes were altered to better match both the updated time period and Russian culture * specifically, the chase against the Sully stand-in happens while he is enjoying himself at a water park instead of a mall so he has a plausible reason to not have a cell phone on him, and Ivan obtains his guns from a secret stash instead of breaking into a military surplus store due to heavy Russian restrictions on private firearms ownership. The final fight against not!Bennett is also quite different from the original.

Not to Be Confused with the long-running British Comic Book Commando, which is a little more sedate in its overall narrative. Does not involve Going Commando, either. Or the Capcom arcade/console gamenote Known as "Senjou no Ookami" (officially translated as "Wolf of the Battlefield") in Japan., for that matter (or its bionic counterpartnote Which is known as "Top Secret" in Japan.).

Remember, troper, when I promised to ruin your life last? I Lied.