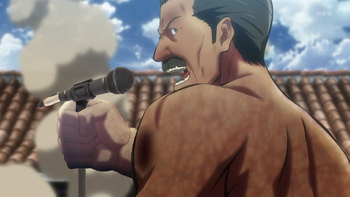 Freddie Mercury is one of the most known and talented musicians ever. But before the Bohemian Rhapsody biopic was made, Freddie was already the inspiration for various characters in media and even memes.

This trope is for those Stock Parodies or Expies based on the historical Queen frontman. The most common look is the "clone" one Freddie used in The '80s, with short hair combed back, a prominent moustache, and sometimes one of the more iconic costumes, most often that from the 1986 Wembley concert with white t-shirt and pants and yellow leather jacket

◊. Some examples uses his look from The '70s, clean-shaven with long hair and chest-exposing leotards

◊. Extra points if the character is Camp Gay, Macho Camp, and/or a Large Ham.