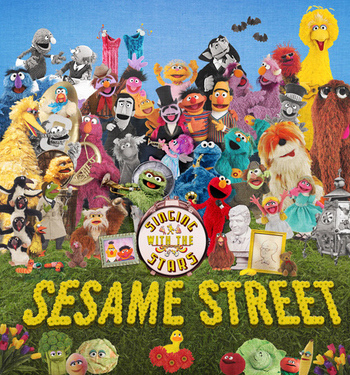 The album cover of The Beatles' Sgt. Pepper's Lonely Hearts Club Band is one of the most recognizable album covers of all time, if not the most famous. Paul McCartney wanted to change the group's image and as a result all members let their hair and moustaches grow and pretended to be a different band. On the album cover, designed by Peter Blake and Jann Haworth, the Beatles pose dressed in military uniforms, surrounded by a celebrity audience chosen by the members themselves. Forty celebrities are either wax works or photo collage cut-outs. Note that originally there were supposed to be several more, but they were censored out by the Beatles' label EMI for being too controversial (including, in a bit of Values Dissonance, Gandhi).

Thanks to its global fame and popularity, many shout-outs to the album have been made throughout the years, especially to the collage album cover. Even Blake himself made a new homage

featuring new celebrity cut-outs to celebrate his 80th birthday in 2012.

The Ur-Example is the cover of Frank Zappa and the Mothers of Invention's We're Only in It for the Money.

Abbey Road Crossing is another trope based on parodies of a specific Beatles album cover. Borrowing the Beatles are parodies of the band itself.