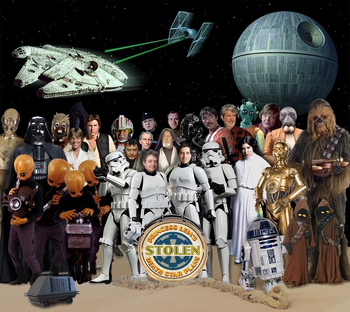 "Star Wars and Sgt. Pepper, together at last, like you've never experienced them before."
It was many years ago today
In a galaxy so far away
It's a period of civil war
They don't want the
Empire any more
The rebels made a
daring move
They've got some data
in their hands
Princess Leia's stolen
Death Star Plans...
Advertisement:

retelling the events of Star Wars: A New Hope, sung to the tune of the songs from The Beatles' Sgt. Pepper's Lonely Hearts Club Band.

"They're Princess Leia's stolen trope page plans, she's got them and it's time to go":