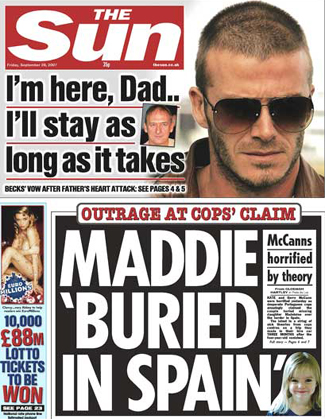 The Sun, Friday 28 September 2007: Footballer's dad has heart attack, kidnapped child may be dead, lottery tickets to be won. Groundbreaking stuff.
But the baggage-handlers’ strike was followed by news on the drought in the Southeast (“I hope he’s listening next door!” bellowed Uncle Vernon, “with his sprinklers on at three in the morning!”); then a helicopter that had almost crashed in a field in Surrey, then a famous actress’s divorce from her famous husband (“as if we’re interested in their sordid affairs,” sniffed Aunt Petunia, who had followed the case obsessively in every magazine she could lay her bony hands on).
Advertisement:
Harry closed his eyes against the now blazing evening sky as the newsreader said, “And finally, Bungy the budgie has found a novel way of keeping cool this summer. Bungy, who lives at the Five Feathers in Barnsley, has learned to water-ski! Mary Dorkins went to find out more...” Harry opened his eyes again. If they had reached water-skiing budgerigars, there was nothing else worth hearing.
Harry Potter and the Order of the Phoenix

In the United Kingdom, the Silly Season is the period beginning around the middle of summer and running until the start of October, in which Parliament retires for summer and newspapers across the country scramble for something - anything - to fill pages and pull in readers.

So expect plenty of spurious stories about kidnapped kids, celebrities going wild and whatever else the papers can churn up to fill the gaps. Since nothing of any genuine national importance is published for two months, this sometimes leads to public concern/uproar/panic over articles that would usually be pushed to an inside page and forgotten about within days. In a worst-case scenario, this can lead to a Pædo Hunt, possibly a literal one in the mould of Torches and Pitchforks.

The news media in the USA follow a similar path in July and August, with Shark Attacks! and other filler stories when business in Washington, D.C., and New York wind down for the summer, and the paucity of new scripted programming means television networks and stations need something to draw viewers in to watch. This sort of thing also happens during Sweeps, especially with local news programming. One summer was actually referred to as "The Summer of The Shark" because the rest of the news was so slow, despite the fact that shark attack rates that year were no higher than usual. Really, they just seem to hate sharks. It was also the summer of the Chandra Levy murder, which brought down a congressman who was wrongly accused of said crime because the media didn't check their facts. But once September came along, the 2001 silly season ended with a big thud in a really, really unexpected way.... (Somewhat) fortunately (or very unfortunately) for Americans, elections occur every two years in the United States—with presidential ones coming every four—and August is the buildup to real Campaign Season: Labor Day. This means that politicians tend to start really hitting the campaign trail at that time, giving the newsmedia something better to cover than the eating habits of unusually large fish.

(A side-note for motorsport fans: No, this trope has nothing to do with the period during the season in which drivers and crew members make a bunch of deals with other teams... especially as those never get into the newspaper, even during these periods.)

, to the relief of politicians who were spared having to talk about the recession. In the United States, July and August 2009 were infamously dominated by stories surrounding the death of Michael Jackson.

The term's been around since at least 1887; in 1950, the scifi author Cyril M. Kornbluth wrote a story with this trope as a title, in which invading Martians use the phenomenon to catch humanity off-guard and take over the Earth.

This isn't restricted to the mentioned countries: Chile, being in the southern hemisphere, has its own silly season during the summer vacation months of January and February. The Dutch concept of "cucumber time" is similar - a somewhat outdated term for a time in which nothing noteworthy happened, and thus the newspapers would report on, say, the growth of cucumbers (or potatoes, or cabbage ...any usually-ignored crop yield). In Spain, this phenomenon is called "serpiente de verano" ("summer snake"), while the Swedes call it "nyhetstorka" (news-drought).