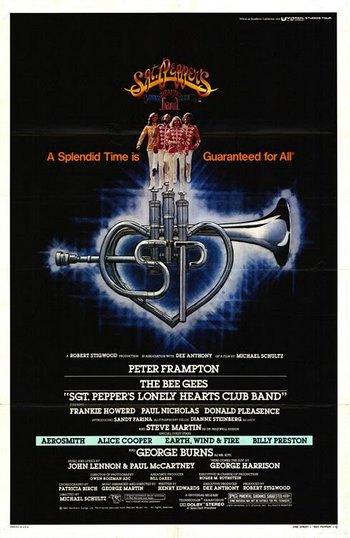 Cue the insane calliope...
"A Splendid Time is Guaranteed for All"
— Tagline
Advertisement:

This All-Star Cast fantasy tries to wrap a storyline around Beatles songs and characters in them, as a vehicle for popular acts of the time: Peter Frampton, the Bee Gees, Alice Cooper, etc. There is no spoken dialogue aside from that of narrator Mr. Kite (Burns), the mayor of Heartland, USA.

A prologue establishes that the original Sgt. Pepper and his bandmates were able to bring peace and harmony to those around them — even warring armies — with their music. After he died, the magical instruments were given over to the care of his hometown of Heartland, and now his grandson Billy Shears (Frampton) has formed a new version of the band with his friends the Henderson Brothers (the Bee Gees). They're good enough that they attract the attention of unscrupulous producer B.D. Hoffler (Pleasence), and soon they are off to Hollywood to experience the hedonistic side of superstardom.

Alas, back home an evil organization known as "F.V.B." has its sights set on the original instruments, for the joy and love they embody is anathema to them. The mean Mr. Mustard (Howerd) and his goon the Brute easily overpower Mr. Kite and steal the four instruments for them; soon Heartland has decayed into a sleazy shadow of its former self that Mr. Mustard gleefully dominates. Billy's girlfriend Strawberry Fields runs away from home and tells the band what happened; together they must track down the stolen instruments if they hope to restore Heartland — which won't be easy thanks to all the treachery surrounding them.

While Aerosmith's take on "Come Together" and Earth, Wind & Fire's cover of "Got to Get You Into My Life" are well-regarded, this movie also gave us George Burns singing "Fixing a Hole" and Steve Martin performing "Maxwell's Silver Hammer". The silly story and frequent poor match-ups of songs to situations render it all So Bad, It's Good at best, and it was a major flop, swiftly overshadowed by another rock musical, Grease, at the summer box office. Capitol Records re-released the Beatles' album with the label "The Original Classic" as impressionable teenage girls were under the impression that the Bee Gees and Peter Frampton thought up Sgt. Pepper first, and Yellow Submarine (which bears the credit "starring Sgt. Pepper's Lonely Hearts Club Band") made the rounds on TV in syndication.

Compare Across the Universe (2007), another film which wraps a plotline around Beatles songs.