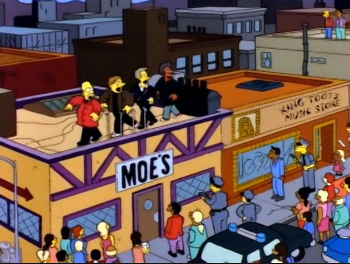 "Homer's Barbershop Quartet" is the first episode of the fifth season of The Simpsons (production code 9F21), first aired on 9/30/1993. This episode tells the rise and fall of The Be Sharps, a barbershop quartet fronted by Homer whose career mirrored that of The Beatles, with the Fab Four's George Harrison guesting.

At the annual Springfield Swap Meet, Moe tries to sell "Lucille Ball clams", Flanders offers trading cards of biblical figures, Lisa finds an early Malibu Stacy doll and Skinner comes across his Vietnam POW helmet. Homer finds no apparent value in famous antiques, Marge unsuccessfully attempts to sell some crafts, and in Jeff Albertson (the Comic Book Guy)'s stand, Bart and Lisa find Meet the Be Sharps, an LP album whose cover features Homer. He then proceeds to tell how, back in the summer of 1985, he sang in a barbershop quartet alongside Chief Wiggum, Apu and Skinner, performing at "Moe's Cavern" as well as other places, including the state jail. One night at Moe's, a talent agent called Nigel shows interest in the group, but asks for Wiggum to be removed, as he sounds too outdated in his opinion. After Homer drops Wiggum in the middle of nowhere like a dog, the quartet attempts to hold auditions for a replacement, but the applicants, including a poorly-disguised Wiggum, are just no good. About to give up, they happen to listen Barney Gumble singing an Irish lullaby while looking for his keys at the stalls. At first, people don't seem willing to take Wiggum's replacement, but then go wild for Barney as soon as he sings, much to Wiggum's embarrassment. After the show, the quartet takes on the name of "The Be Sharps".

Back in the present, Homer seems to be the only one to have sold anything at the swap meet... the back-up tires. As the car has a blow-out and Marge is forced to walk 10 miles to the nearest gas station, Homer tells the kids about the Be Sharps' rise to stardom. While Homer attempts to write a song about the Capone vault hoax, Marge shows him a "baby on board" sticker for the car. The result: The song "Baby on Board", which becomes a big hit and makes the Be Sharps internationally famous. In May 1986, the group arrives in New York, where they perform at the Statue of Liberty Centennial in front of President Reagan, while Chief Wiggum becomes a national laughingstock. At the Grammys, David Crosby presents the Be Sharps with an award. Here, Homer experiences the biggest thrill of his life: a plate of pound cakes with George Harrison present. But, in spite of his success, Homer begins to feel homesick and Marge attempts to fill his void at home with very little success.

Back home, the family finds some Be Sharps merchandise that had been hidden in the attic, including a second album entitled Bigger than Jesus (just after Bart wondered if the group screwed it up by doing the same as The Beatles). After seeing the LP, Homer tells how it came all apart. By this time, the quartet has become artistically stagnant and conflicts arise, with Barney bringing in his new girlfriend, a Japanese artist whose idea for the group is looping her saying "Number eight" and Barney's belches ad nauseam. Then Homer tells how it all ended: the group's members find out in US Weekly they're no longer "hot" on the "Hot or Not" list and return to their normal lives. As Homer ends his story, Bart and Lisa ask him how they never knew about his musical career. He tells them he'll answer that another day. Feeling nostalgic, Homer reunites with Skinner, Apu and Barney at Moe's rooftop (not having performed together since a Dame Edna special one year earlier), where they sing "Baby on Board" to the surprise of the townspeople and the indifference of George Harrison, and much to the chagrin of a "fly man" who's in the middle of a stunt, and Chief Wiggum, who calls in the riot squad.