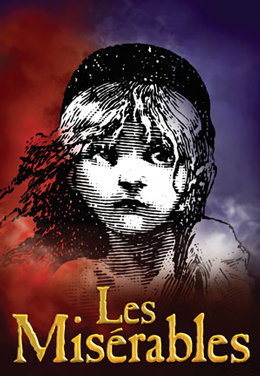 Do you hear the people sing? / Singing a song of angry men
It is the music of a people / Who will not be slaves again!
When the beating of your heart / Echoes the beating of the drums
There is a life about to start / When tomorrow comes!
— Enjolras, "Do You Hear the People Sing?"
Advertisement:

The famous musical adaptation of the novel by Victor Hugo. An ever popular choice for schools and drama companies of all levels, this epic show celebrated its 25th anniversary in 2010. Originally a French musical by Claude-Michel Schönberg, Alain Boublil, and Jean-Marc Natel, it compressed the plot of the book even more tightly than the book itself did. Then Cameron Mackintosh got his hands on the rights, and Herbert Kretzmer adapted the libretto.

The result was what can only be called a bona fide musical theatre phenomenon. The show opened at the Royal Shakespeare Company's Barbican Theatre in 1985, and has been running without interruption ever since.

It debuted on Broadway two years later, where it won eight Tony Awards, including Best Musical and Best Original Score. "Les Mis" is the longest-running major musical in the world, with the West End production alone having played an astounding 10,000+ performances.

Played over fifty-one thousand times in over 347 cities and forty-four different countries around the world, with over seventy official recordings in twenty-two separate languages, Les Misérables has been hailed as the most famous, most popular, most influential, most beloved, and most-performed work of musical theatre ever written.

in November 2012, and the movie debuted on Christmas Day 2012, with wide and international release in January 2013, which included an engagement in IMAX. See Les Misérables (2012).

open/close all folders
A-B
C-D
E-F
G-H
I-J
K-L
M-N
O-P
Q-S
T-V
W-Z
Do you hear the people sing? / Lost in the valley of the night.
It is the music of a people / Who are climbing to the light.
For the wretched of the earth / There is a flame that never dies
Even the darkest night will end / And the sun will rise!