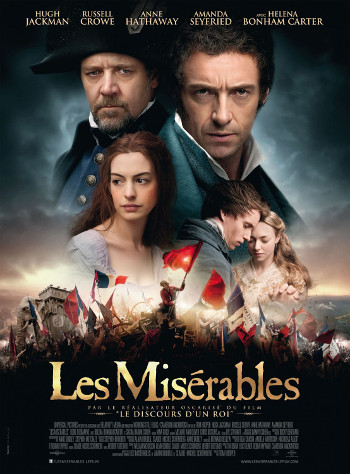 Fight. Dream. Hope. Love.
"Do you hear the people sing? Singing a song of angry men.
It is the music of a people who will not be slaves again!
When the beating of your heart echoes the beating of the drums
There is a life about to start when tomorrow comes!"
— Do You Hear the People Sing?

Les Misérables is a 2012 film version of the stage musical of the same name, itself an adaptation of Victor Hugo's epic novel of the same name. While primarily based on the musical, the film also incorporates elements from the novel that were left out of the original production.

Like the novel and musical, the film chronicles the story of Jean Valjean (Hugh Jackman), a reformed criminal who becomes mayor of a small town in France. After one of his workers, Fantine (Anne Hathaway), is outed as a single mother and resorts to prostitution before dying, Valjean takes custody of her daughter Cosette (Amanda Seyfried as an adult) from the scheming Thénardiers (Sacha Baron Cohen and Helena Bonham-Carter).

Some years later, Valjean and Cosette have moved to Paris, where sparks fly between her and young bachelor Marius (Eddie Redmayne). Marius is also a member of a revolutionary group led by Enjolras (Aaron Tveit), and is oblivious to the feelings of the now-impoverished Thénardier daughter Eponine (Samantha Barks). Inspector Javert (Russell Crowe), the officer who granted Valjean's parole, tries to maintain order as revolution brews in Paris, while Valjean risks his identity being discovered by Javert, who does not believe he has truly reformed.

It was produced by Cameron Mackintosh and directed by Tom Hooper. A sung-through musical, the film is notable for Hooper's decision to have the vocals recorded live on set, as opposed to having the actors lip-synch to pre-recorded tracks, to create more natural performances.

In addition to tropes inherited from both the novel and the stage adaptation of this story, this film provides examples of: