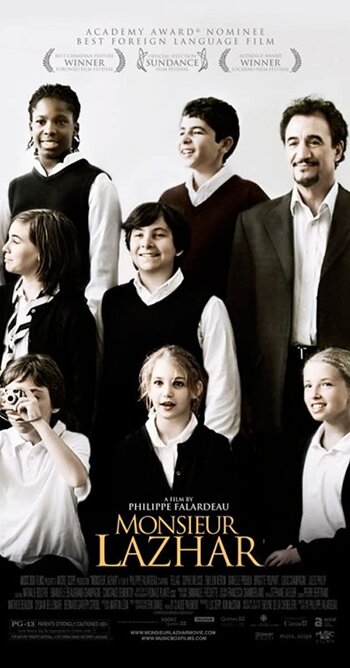 Monsieur Lazhar is a 2012 Canadian film (specifically from Quebec, so in French) directed by Phillipe Farardeau.

The setting is a primary school in Montreal. One day a boy of maybe 12, Simon, goes back to class from recess carrying the milk cartons, only to find that his teacher, Martine, has hanged herself in the classroom. His best friend, a girl named Alice (Sophie Nélisse), manages to also catch a glimpse of the dead teacher before the whole student body is hustled out of the building.

The panicked principal, Mrs. Vaillancourt, needs a new teacher, pronto. Enter Bachir Lazhar (Mohamed Saïd Fellag), an immigrant from Algeria looking for a job. Lazhar says that he taught in Algeria for 19 years, he speaks fluent French because he's from Algeria, and he's willing to start right away. A desperate Mrs. Vaillancourt hires him immediately.

Monsieur Lazhar has some initial awkwardness with his students; they criticize his Algerian dialect of French and they think that Balzac is too hard for an assignment. But he soon wins them over with his charm and empathy. However, he has a secret that he hasn't told his employer.