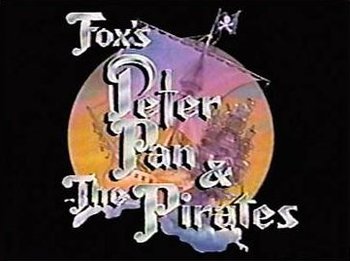 Fox's Peter Pan & the Piratesnote Known internationally as Twentieth Century Fox's Peter Pan & the Pirates is a cartoon that ran for two seasons (1990-1991). It is a heavily expanded take on the classic story of Peter Pan. With high characterization and storytelling for its time, this cartoon was Truer to the Text than many other adaptations, and its original elements remain true to the spirit of the original story. It was the very first show to air on the "Fox Kids Network".note While promos started using the "Fox Kids" name as early as 1993, it wouldn't be until after the merger with Saban Entertainment that the block would officially be known as "Fox Kids".

The show was episodic in nature with a focus on adventure, humor, and drama, and wasn't afraid to delve into the darker aspects of Neverland. Another notable aspect is giving equal focus to the pirates and other characters alongside Peter, Wendy, and the boys.

When shown during its second year, the network tended to focus on the sillier episodes in order to make the show Lighter and Softer. Ultimately, the show was canceled only a few months into its second year, though a two-part Grand Finale closed out the series. A video game adaptation was created for the NES which was, in many respects, rather faithful to the show.

Not to be confused with the anime The Adventures of Peter Pan.