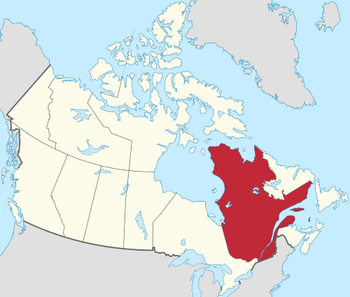 The people of Quebec are having a lot of stress
Even Gilles Vigneault has changed his name to Gilles Vign-yes
— Bowser And Blue, intro to Faute du Federal
Advertisement:

Quebec (Québec in French, mind the accent) is the largest Canadian province in area, and second only to Nunavut in all of Canadian territorial units. It is also the Country's only officially French-speaking province. As a result, its distinct culture, not to mention its sovereignty movement, have set it apart from the rest (read: the primarily English-speaking areas) of Canada. In 2006, the Canadian Parliament declared Quebec as a "nation within a united Canada".

Its capital is Quebec City and the largest city is Montreal. Also noted are Sherbrooke, Chicoutimi, Trois-Rivières, and Gatineau, bordering Ottawa. Quebec borders the province of Ontario to the west and both Newfoundland and Labrador as well as New Brunswick to the east. It also shares an international boundary with the US states of New York, Vermont, New Hampshire, and Maine.

The territory now encompassing Quebec was first inhabited by Inuit and Native American peoples such as the Huron. Jacques Cartier in the 1500s later reached the area in Quebec and helped set up a colony called Stadacona. The settlement failed; however, the French did not give up. Later, French merchants set up shop in the Saint Lawrence Valley and became fur traders.

In 1608, Samuel de Champlain founded Quebec City to make it the base of French power in North America. With alliance between Huron and Algonquin tribes, the French secured the territory. In exchange of furs, the French gave the First Nations their alcohol, guns, and clothing, and also tried to convert them to Catholicism with various degree of success. Later, the French kings introduced the seigneural system where settlers from the French Empire, primarily Normans and Bretons, will till a part of land for their landlords, called the seigneurs. These settlers, whose descendants came to be known as Canadiens, will later also expand to what is today Ontario, Manitoba, and even territories along the Great Lakes Mississippi River and in the United States.

New France was a pawn in the Seven Years' War between the French and British. The French are losing almost on the start, with a lower population base than those of the British Thirteen Colonies, but they held on until 1760, when the British defeated the French in the Plains of Abraham outside of Quebec City, placing New France under military occupation until it formally became a British possession in 1763 as part of the peace treaty between France and Great Britain.

However, the Quebec Act did provide the survival of French law, culture, and language in Quebec, as its territory was shrunk into what is now southern Quebec and Labrador. Eventually, the lands west of the Ottawa River were given to mainly English-speaking settlers, many of them American Loyalists, and thus became Ontario, or Upper Canada (because it was upstream along the Great Lakes/St. Lawrence system). Quebec was thus designated Lower Canada.

In 1837, the provinces in Lower and Upper Canada exploded in rebellion. The Patriotes movement, largely led by Francophones like Louis-Joseph Papineau and Anglophone Robert Nelson, almost swept Canada. While it failed, it did make a deep imprint in Quebec history. The result is that Quebec, now called Canada East as it was merged in 1840 into the Province of Canada, was to be given self-government. Quebec then became one of the founding provinces of Canada in 1867, and tried to accommodate to the English-speaking provinces while maintaining its francophone identity.

When the Confederation of Canada took place from 1864-1867, the Franco-Canadian participants in the discussions were adamant that Confederation be a federal system, one that ensured that their province had the political tools it needed to maintain its Francophone identity. This went against the wishes of most of the English-speaking participants, who wanted a "legislative union" that would simply combine all of the British North American colonies into one larger entity with no internal borders. In the end, part of the eventual compromise was that Canada would become a federal state with very specific powers for the provinces, while the federal government would be paramount in all other areas.

As time went on, Montreal became Canada's largest city (it has since been overtaken by Toronto) and its center of industry. However, many French-speakers resented the economic power of the Anglophone, both Canadian and American, ruling class. Furthermore, the decision by Ottawa to send troops for The Second Boer War had further angered Quebecers. Resistance to the draft was common in Quebec during the two world wars. Despite this, many Quebecers distinguished themselves in combat.

During 1944, Maurice Duplessis took power as premier of Quebec. He tried to champion Quebec nationalism and conservatism in all areas. He also created Hydro-Québec, one of Canada's largest electric companies today. Many other intellectuals, among them a lawyer named Pierre Elliot Trudeau, opposed Duplessis. They later sowed the seeds of the so-called Quiet Revolution, where responsibility for education was transferred from church to state, state intervention in the Quebec economy, secularization, modernization and liberalization of Quebec public life, and so on. In this period, the concept of Quebecois identity was formed.

There are some who thought rebellion and secession under a Communist state was the only option to preserve Quebec identity, and the Front de libération du Québec tried to do just that, targeting Anglophone institutions and what they saw as pro-Ottawa Francophones. This led to the October Crisis in 1970 where FLQ terrorists kidnapped a British trade commissioner and a Quebec government official. The latter one was later killed; the British diplomat was freed by the Canadian government in exchange for the FLQ members involved to leave for Cuba. Trudeau—by this point Prime Minister and a vehement federalist (opponent of secession)—later invoked the controversial War Measures Act and arrested suspected militant Quebec separatists. The violence of the FLQ later cost them popular support, while the arbitrary imprisonment of activists, journalists and even poets under the War Measures Act is still remembered.

On the other hand, the Parti Québécois (non-violent Quebec separatists) gained popularity under René Lévesque and won a victory in the 1976 provincial election. They passed the Charter of the French Language (also known as "Bill 101") to make French the province's only official language and impose some restrictions on the use of English in schools and workplaces. They also held a referendum on whether to make Quebec "sovereign" (read: independent) in 1980, only for it to be defeated by a landslide. Attempts by the Quebec government to gain more provincial rights and leverage resulted in the new 1982 Canadian constitution, which was not ratified in Quebec. In 1987, the Meech Lake Accord was held by Canadian premiers to try to patch up differences, but failed utterly in the early 1990s. Later, the Parti Québécois held a second sovereignty referendum in 1995. This time, the "no" side only won by a slim margin. The premier of Quebec blamed it on "money and ethnic votes" that exacerbated the matter. Since then, actual support for sovereignty has declined, while at the same time the vast majority of inhabitants of the province consider themselves more Quebecer than Canadian. Quebec is trying to find its place in Canadian and world society, becoming a leader in information technology, energy, aerospace, and Maple Syrup.

One element of Quebec society that many people in the rest of Canada tend to overlook is that the Quebecers, except for usually Anglo-Quebecers and Indigenous people living within Quebec's borders, are much more likely to emphasize Canada as The Federation than other Canadians. While most other Canadians tend to see themselves as simply "Canadians", a lot of Quebecers, and most francophones, see themselves as a distinct nation with very particular concerns about identity that is participating in a greater polity. Intrusions into what are seen as Quebec's rightful jurisdictions are considered very Serious Business and potential threats to Quebec's francophone identity. Note that, due to some controversies, Quebec nationalism has been accused of being based on the "pure laine" (pure wool) ethnicity. This basically refers to Quebecers that either exclusively or overwhelminglynote Some Quebecers that would otherwise fit the profile have non-French surnames due to different phenomena, such as Franco-Canadian families adopting Irish Catholic immigrants during the famine and these kids completely assimilating aside from keeping their last names, Americans or American-born Loyalists assimilating into Canadien society due to being outnumbered, and miscellaneous European immigrants, especially Italians, assimilating into the Franco-Canadian community rather than the Anglo-Canadian one like most immigrants at the time. descend from New France-born Canadien settlers and whose linguistic upbringing was only done in French. However, in practice, it is a cultural nationalism that includes space for the Quebec's anglophone community and new immigrants regardless of skin colour. In a way, Quebec nationalism often isn't that different from its Canadian counterpart, emphasizing common values rather than ethnicity.