Literature / Shake Hands with the Devil 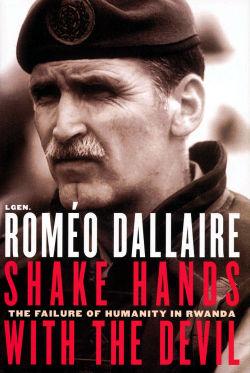 Shake Hands with the Devil: The Failure of Humanity in Rwanda is a 2003 non-fiction book by Lieutenant General Romeo Dallaire and Major Brent Beardsley. The bulk of the book is the account of Dallaire's experiences as force commander of the United Nations Assistance Mission for Rwanda (UNAMIR) from 1993-1994. Dallaire and UNAMIR are originally tasked with preserving the fragile Arusha Accords, a ceasefire agreement which the UN hopes will be a roadmap to peacefully ending Rwanda's ethnic civil war. UNAMIR is meant to be the neutral force keeping the peace between the Hutu-dominated Rwandan government and the Tutsi militants of the Rwandan Patriotic Front (RPF) as the two sides form a multi-ethnic transitional democratic government.

As the situation deteriorates and Rwanda plunges into a bloody genocide Dallaire the rest of UNAMIR do what they can, within the restrictive standing orders imposed by the UN Security Council, to protect civilians and stem the bloodshed as Dallaire desperately tries to convince the UN and major world powers to do something.

The book won the 2003 Shaughnessy Cohen Award for Political Writing and 2004 Governor General's Award for nonfiction. The book also served as the basis for a documentary film about Dallaire's life called Shake Hands With the Devil: The Journey of Romeo Dallaire in 2004.

A fictionalized version of Dallaire, played by Nick Nolte, appears in the 2004 film Hotel Rwanda.