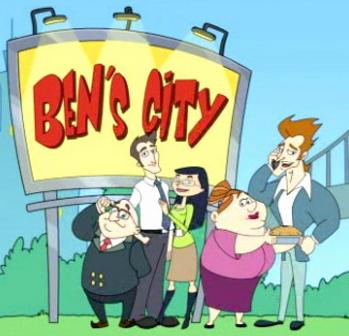 Only as grounded in reality as it wants to be.
Advertisement:

Ben's City is a CBC Web Animation series from Oasis Animation that airs in Canada. It depicts the adventures of Nice Guy Ben Hardy through his everyday life. Ben juggles his romance with his Asian girlfriend Sophie, his friendship with publicist Scott Gardner, and his job as counselor for Quebec's Minister of Environment, Henry Wallet. Scott also frequently helps his neighbor, Mrs. Shrink, whose husband was an inventor.

The series' tone is generally upbeat and shows Slices of Life of the characters. The episodes' plots go from political meddling to adult worries to intrusion of supernatural.

The show first aired in the province of Quebec under the title Pérusse Cité. The series was, in fact, created by François Pérusse, a Quebecois comedian famous for being a Pungeon Master, and the worlds he invents are Worlds of Pun. He's already legendary in French-speaking Canadian culture for being the creator of Les 2 Minutes du Peuple. He also does every single voice in the show (yes, even the female ones). The show was then translated to the English language for the rest of Canada, though many of the puns were Lost in Translation. Fortunately, having everyone voiced by the same person was kept in, with prominent Montreal-based voice actor Rick Jones being the show's sole dub actor.

A second season began in May 2013. The series was not renewed for a third season.

The series could originally be seen

on CBC, but it was taken down. The original French series can be seen