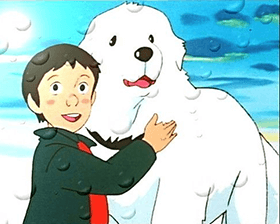 Belle and Sebastian (Meiken Jolie) is an anime that ran between 1981 and 1982 based on a French TV series of the 60s that was also published as novels. It was then exported to other countries in Europe and Latin America where it became very popular. It also received a measure of success in North America, with the English dub being an early cartoon series on Nickelodeon and both the English and French dubs airing in Canada.

It follows the adventures of a boy called Sebastian who lives in the French side of the Pyrenees (southern Alps in the novels and French TV series) mountain range with his adoptive grandfather, brother and sister. One day he meets an enormous white dog (appropriately enough, a Great Pyrenees

) who is being wrongly accused of attacking people and becomes friends with her. He names her Belle ("Beauty") and, alongside his tiny dog Poochie, decides to cross the Pyrenees into Spain in search for his Gypsy mother. They have many adventures and make many friends on their way while avoiding the authorities hunting for Belle.

Not to be confused with the culty admired indie rock band Belle and Sebastian which also got its name from the books. Or the Disney characters.