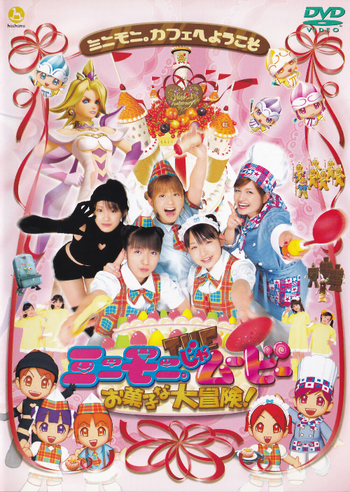 Mini Moni The Movie: Okashi na Daibōken! is a live-action/animation hybrid movie starring the popular Morning Musume subgroup Mini Moni. Made as a way to explain Mari Yaguchi leaving the group and Ai Takahashi joining as her replacement, the majority of the movie is all-CGI, with live-action beginning and ending segments filmed on green screens.

It's almost the second anniversary of Mini Moni's founding, and everyone at the Mini Moni Cafe is busy preparing a fabulous cake shaped like a castle to celebrate. Cafe leader Mari Yaguchi oversees baker Mika Todd and waitresses Nozomi Tsuji and Ai Kago, but when the curious customer Ai Takahashi wants to know why the cakes they make taste so great, they're unable to answer. She decides to find out for herself by stealing the cakes, but soon deeper trouble forms.

The vain, cake-hating fairy queen Nakajalinu the 29th invades the cafe and claims the castle for her own, instructing her servants to turn all the cakes into stone. They succeed, but Mini Moni and Takahashi are shrunk down as well, turning into cute, CGI versions of themselves. Mini Moni heads to confront the queen, determined to restore the cafe to normal and get their original bodies back, but they may not succeed without the help of Takahashi, Reizo the living fridge, and the power of cake.