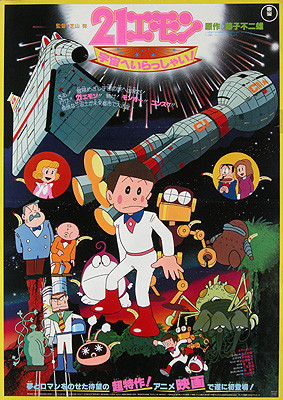 21 Emon, also known as 21 Emon: The 21st Century Kid, is a comic by Fujiko F. Fujio that was released from 1968 to 1969 in the Shogakukan magazine Weekly Shōnen Sunday. Shin-Ei Animation created a TV series that aired 39 episodes from 1991 to 1992, and there are also a full film and two Short Films.

The year is 2018 (or between 2051-2071 in the show). Tsuzure Inn has been in business for over 450 years and it has helped tourists from all over the universe. The young kid 21 Emon is the twenty-first descendant of the original owners of the inn. His parents want him to take over the hotel, but he doesn't want to run the business. He instead wants to become an astronaut and spend his time exploring outer space.

The series has a crossover with Doraemon in the Short Film 21 Emon & Doraemon: Welcome to Hotel Tsunesha. This is after Gonsuke had made several other appearances in Doraemon.