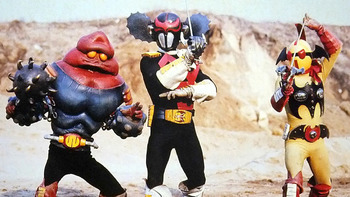 The Akuma Clan is a vast civilization of cyborg demons living within the center of the Earth which invades the surface world to enslave humanity so they can use them to power their machinery. Fighting against the Akuma Clan is a Power Trio of demons who defected from them to defend humanity, the Akumaizer 3.

The Akumaizer 3 is comprised of

The series premiered on Tuesday October 7, 1975 at 7:30, and ran for 38 episodes in that timeslot on NET, now known as TV Asahi. After its conclusion, it received a sequel series in the form of Choujin Bibyun, which saw the Akumaizer 3 possessing a trio of humans to grant them their power to fight against invading Youkai. It was also notable for using rejected Kamen Rider designs for its three main heroes.

While virtually obscure internationally and nowhere near as popular as programs such as Kamen Rider or Super Sentai, Akumaizer 3 is still quite popular in its home country and remains renowned today. They appear in updated forms in Kamen Rider × Kamen Rider Wizard & Fourze: Movie War Ultimatum (but as the bad guys). It is also currently one of the shows available on Toei's Tokusatsu World YouTube channel. The first episode can be viewed here