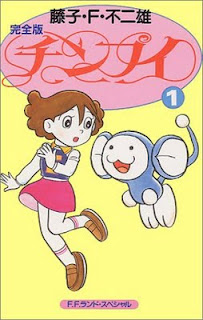 Yet another of Fujiko Fujio's innumerable manga co-productions, Chinpui is basically Doraemon for girls. Most of the former's cast are replicated in some form or another, right down to a lumbering Big G lookalike. The main difference is that the "hero" is a girl and the Magical Helper is an extraterrestrial mouse (as opposed to a robotic cat).

Eri Kasuga is a high spirited Japanese Tomboy who — for totally inexplicable reasons — has been chosen to marry Prince Lulealv of the Planet Mal. In light of this momentous occasion, two envoys have been sent to Earth to announce the upcoming betrothal: Chinpui, an oversized, wish granting mouse; and Wandayuu, a lethally annoying talking dachshund. Like most of Mal's anthropomorphic population, they can perform miracles by simply shouting their names (with the usual disastrous results).

Needless to say, Eri is none too thrilled with the prospect of marrying an alien she's never even met, particularly since she's only eleven years old (in addition, she already has a "sort of boyfriend;" Uchiki-chan, the quiet smart kid who lives down the road).

Faced with this overt rejection, Wandayuu departs to discuss the situation with the Royal family, leaving Chinpui behind to serve and protect "their future princess." While Eri initially regards Chinpui as a nuisance, he soon proves himself a loyal and trustworthy friend, especially when it comes to solving the inevitable problems caused by Wandayuu's meddling schemes. Hilarity naturally ensues, as Eri is besieged by spacefaring freeloaders, bickering aliens, unexpected nudity, and at least one superhuman rival bent on eliminating the competition.