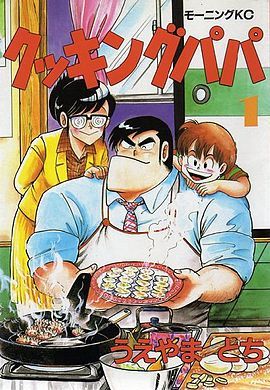 Cooking Papa is a long-running Seinen manga by Tochi Ueyama, which began serialization in Morning in 1985 and is still ongoing. It has an anime adaptation that aired from 1992 to 1995 for 151 episodes.

The story is about Araiwa Kazumi, a family man who cooks his family's meals. He keeps this a secret from his coworkers, as everyone assumes that his wife Nijiko does the cooking (though the truth is that Nijiko doesn't have the time or skills to do so). Still, Kazumi enjoys cooking all the same. Each chapter of the manga ends with full recipes for any featured dishes.

Don't be fooled by the title; it has nothing to do with Cooking Mama.