Anime / Doraemon: Nobita and the Birth of Japan 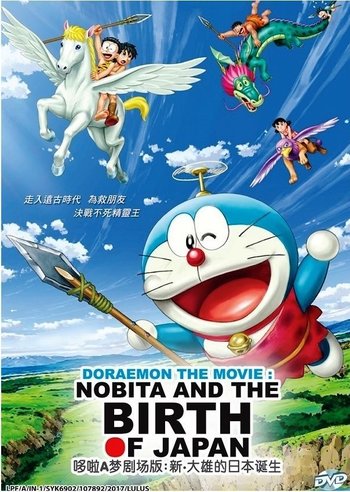 Friendship could cross over space-time

Doraemon: Nobita and the Birth of Japan is the 10th film installment in the Doraemon franchise, as well as the first one to release in the Heisei era.

Nobita and friends have had it with their busy schoolwork, exams, and wishes to take a retreat for a while. To their surprise, Doraemon is on their side this time, after Nobita's parents, the Nobis, brought a pair of guinea pigs into the house, given Doraemon's usual crippling phobia of rodents. One thing leads to another and the gang then decides to hop into the Time Machine in Nobita's drawer, Time Travel to the prehistoric period, and live over there for a few weeks.

And then they rescue a young boy named Kukuru (an Identical Stranger to Nobita) who's the Sole Survivor after his tribal home was destroyed by living robots. Before discovering an ancient, sinister conspiracy threatening to rewrite history.