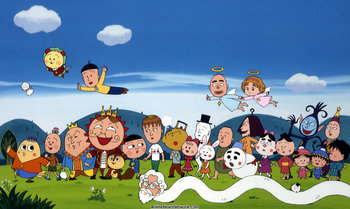 Coji-Coji is a Shoujo manga and anime series about an alien who resides in Fairy Tale Land (a land that is inhabited by fictional characters) and the daily lives of the characters. The manga was created by Momoko Sakura (the same creator that created Chibi Maruko-chan), and ran in Kimi to Boku from 1994 to 1997.

The anime adaptation originally aired from 1997 to 1999 for 100 episodes. It is broadcast weekly on Saturdays at 5:30PM on Tokyo Broadcasting System. A stage play was produced in 2019.